As my colleague Bonchie reported earlier, Democrats blocked a bill to provide Americans with an economic stimulus to weather the harm to the economy the Wuhan coronavirus quarantines have wrought.

Democratic senators had reportedly worked on it with Republicans all weekend, had it ready to go, when House Speaker Nancy Pelosi allegedly stepped in and quashed the deal.

"We’ll have this cloture vote again at some point of my choosing, and hopefully some adults will show up on the other side of the room and understand the gravity of the situation…" pic.twitter.com/KJpxmff0rW

If you noticed Sen. Mitch McConnell (R-KY) is absolutely livid.

Why? Because the woman who so successfully shepherded the impeachment fiasco may be trying a little more gamesmanship. Too bad, American people or the American economy, if you lose in the process. Democrats are playing their petty little power games again.

Some Dems are betting that Trump will he received as Bush post-Katrina as opposed to Bush post-9/11. And there’s a split among Dems about how they ought to be handling Trump in this moment, which so far has ended up benefiting the president. https://www.nytimes.com/2020/03/22/us/politics/coronavirus-trump-wartime-president.html …

The Chief of Staff and Communications Director for Rep. Mark Meadows, Ben Williamson:

Senate spends all weekend negotiating a bipartisan deal. Agreement reached. Pelosi flies in from California, whips out her unrelated “wishlist,” and says no. Senate Democrats then vote against proceeding on a bill they negotiated.

Because if they drag it out a little longer, they can do in some more businesses, cost people more jobs and that might hurt President Donald Trump, so it can be his “Katrina.” This is just despicable.

A lot of people are getting the message on social media about what the Democrats did.

But apparently Americans who read the New York Times aren’t supposed to really understand what went down, at least not if you check how the headline on the story about the Democrats blocking the stimulus package has changed.

Ken Farnaso, the deputy press secretary for the Trump campaign, picked it up. 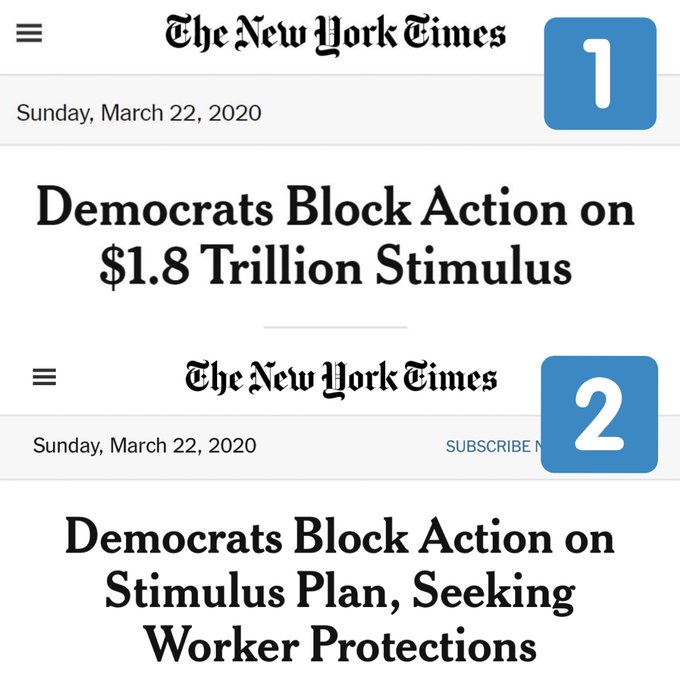 But apparently that first change wasn’t good enough, because people could still read it was the Democrats who blocked relief for Americans. So the headline got yet another rewrite. 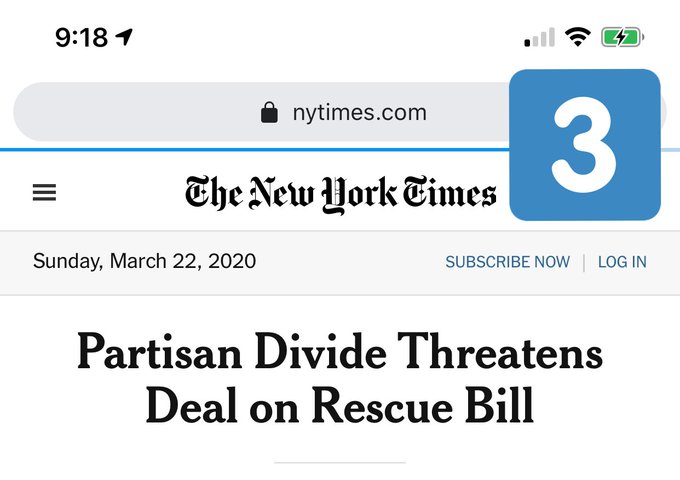 “Democrats block” was changed to “partisan divide.” But as Elizabeth Harrington, GOP national spokesperson, observed, “Who is being “partisan”? Democrat leaders are blocking a bill negotiated by their own members.”

So how does this work? Does Pelosi or Sen. Chuck Schumer (D-NY) make a call? Or is there a special person supervising the headlines to make sure they’re Democrat-friendly and compliant?

Democrats are playing with people’s lives and livelihoods. But apparently the “paper of record” doesn’t think that’s important to say in a headline.

But sure, no bias here.

Beware: Dems & Media Are Trying To Divide Trump’s Team With A Fake ‘Clash’