The Speaker of the House Nancy got so mad during an interview on CNN you could almost see the smoke come out of her ears.  When CNN’s Christiane Amanpour mentioned that President Trump was acquitted and his poll numbers were up, Pelosi interrupted and flew into a speech ripping rage.

“What about, though, the fact that the president seems liberated, and this is about democratic politics so I’m not asking you to criticize here, but he was acquitted, his poll ratings are high …” Amanpour said.

“He was not … there was no …”Pelosi interrupted.

“And even the senators were saying, ‘yes, it wasn’t right,’ but they didn’t have the courage to act upon that.”

“We always knew he was going to be acquitted by the Senate because we always knew that if the Republicans didn’t care about the evidence or anything else, they proved it by not being willing to see the witnesses, we knew that in advance,” Nadler said. “There were some people who said we shouldn’t impeach the president because of his given approval and expected acquittal by the Senate, no matter what the facts, that would help him politically.”

You can watch the Speaker of the House below: 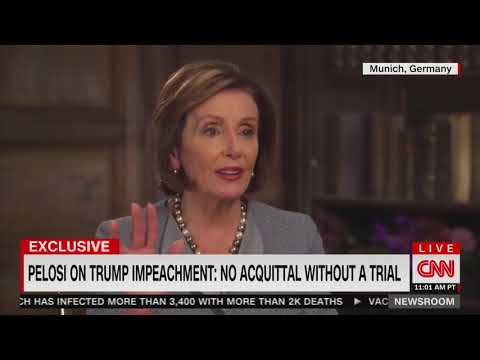