How far are liberals willing to go to try and silence Trump supporters? Honestly, it looks like there is nothing that is truly off limits. Such is the case with a high school student in Michigan.

Sadie Earegood said that she was assaulted by her teacher after she declined to remove a pin from her shirt that said “Women For Trump”. The teacher said that he didn’t like the pin so he wanted her to take it off. When she refused that’s when he came after her.

Kato allegedly told the girl he didn’t like her pin. “He’s talking about the ‘Women for Trump’ pin and I said, ‘that’s fine you don’t have to like it, we can have our opinions,’” she recalled.

“He grabbed [the pin] and I pulled, I tried to push his hand away and he grabbed my shoulder,” the high school junior explained. “(He) just kind of put his hand there, and then he started pulling more and more and I just started backing up.”

“I was really shocked that a teacher, especially, would do that,” Earegood said.

Mr. Kato then allegedly put the “Women for Trump” pin upside down on his own shirt, “stating that it ‘belonged that way,’” the news report said.

The essence of what this teacher is conveying is that it’s okay to assault someone if you don’t like the same presidential candidate as I do.

I’m going to keep saying this each and every time I see a story like this: Parents, if you still have children in public school, it is time to pull them out and either homeschool or private school them. They are being indoctrinated. Fortunately, this young lady seems grounded on the right side, but that’s not the case for most. 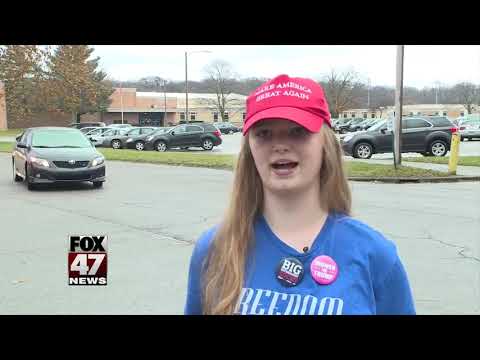 &amp;amp;lt;iframe title=”Student says teacher pulled off her &amp;amp;amp;#039;Women For Trump&amp;amp;amp;#039; pin” width=”1000″ height=”563″ src=”https://www.youtube.com/embed/0jfLVaeZ_E4?feature=oembed&#8221; frameborder=”0″ allow=”accelerometer; autoplay; encrypted-media; gyroscope; picture-in-picture” allowfullscreen&amp;amp;gt;&amp;amp;lt;/iframe&amp;amp;gt;Mason Superintendent Ronald Drzewicki, stated that “Once we have a complete understanding of the situation, we will take appropriate action.”