In the Democratic race for the nominee where everyone is trying to do something to set themselves apart from the rest of the rats in the running, Andrew Yang sure did set himself apart now. Yang even praised AOC’s Green New Deal.

Yang praised socialist Rep. Alexandria Ocasio-Cortez’s $93 trillion Green New Deal and suggested that he supports even the most extreme portions of it, including banning air travel.

Yang said that the “only issue” that he has with the radical plan is that it “would do away with commercial air travel and a lot of other things in a particular timeframe, that if we had a little more time we can head in the same direction and achieve most of the same values.”

But honestly, that may not even be the worst thing about Yang. He has his own crazy ideas.

Yang said, “The U.N. just released a study that said we’re going to be okay if the vast majority of the world goes vegetarian immediately.”

“None of this is speculative anymore. We need to wake up and let you know that you’re not on your own. This is not a you problem, this is an us problem. What do sophisticated, advanced societies do? We solve the problems on the ground.”

“We need to do everything we can to start moving the climate in the right direction, but we also need to start moving our people to higher ground. And the best way to do that is to put economic resources into your hands so you can protect yourself and your families.”

You can bet that Yang would try and tell people what to eat and what not to eat. He’d outlaw beef and fine cows for farting.

He even proposes a car “buy back” plan to force everyone to move toward electric cars and get rid of their gas cars.

By “shape our system” he means higher taxes or even fines on certain products to discourage their use.

You can watch the full town hall below: 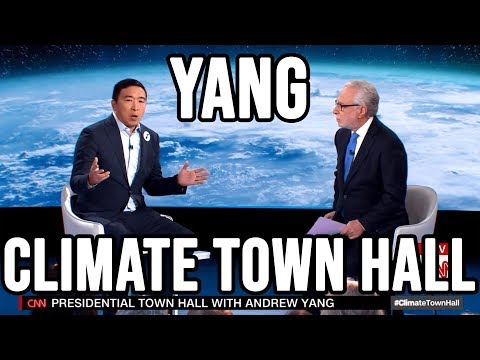