“In 2020, you can bet that all of these companies are going to go all out, and the methods they are using are invisible, they’re subliminal, they are more powerful than most any effects I’ve ever seen in behavioral sciences … almost 40 years.”

In 2020 15 Million votes are at risk, he tells us. And how much time and energy did we spend looking into a few Russian FaceBook ads? Do they not realize the dangerous game they’re embarked in?

Remember that ‘civil war’ article from Silicon Valley about FORCING the Rest of America to flip Blue like they did California? Should we take them seriously now? — Leftists Want A ‘New Civil War’ – This Post Is Disturbing

If you only watch one thing today, make it this: pic.twitter.com/

At a Senate Judiciary Committee hearing, “Google and Censorship through Search Engines,” Dr. Robert Epstein, who researches the impact of Google, informed the hearing that “upwards of 15 million votes” were in jeopardy in the 2020 election. During his testimony, Epstein told Senator Ted Cruz (R-TX) that in 2016, Google gave at least 2.6 million votes to Democratic candidate Hillary Clinton, “through bias and search results.” He stressed that was the lowest number.

When questioned further by Cruz, Epstein gave a more concise answer: “The range is between 2.6 and 10.4 million votes depending on how aggressive they were in using the techniques that I’ve been studying, such as the search engine manipulation effect, the search suggestion effect, the answer bot effect, and a number of others. They control these and no one can counteract them. These are not competitive. These are tools that they have at their disposal exclusively.”

Cruz was shocked by this, responding, “If any headline comes out of this hearing, that should be it.”

This comes hard on the heels of other questions by Peter Thiel — also a Tech Billionaire — about whether Google has been infiltrated and or compromised by any corrupting government influence from China.

Why is this story so very dangerous? If an outsider — say Russia — has been influencing our electoral process, the solution is to tighten safeguards.

But Google is tilting election results — as they seem to have been in Ireland’s Abortion referendum — that is deliberate disenfranchisement. Manipulating people to see and hear only the information ‘gatekeepers’ want them to see and hear to manipulate their decisions and ultimately, choices.

We’re talking about an Orwellian level of control that the citizen isn’t even aware is being exercised on his or her will. — We will MAKE you make the ‘right’ choice.

How? With, as Epstein called it, invisible, subliminal methods and tools described by a forty-year veteran in Behavioral Sciences as ‘more powerful’ than any he’s ever seen.

In revelations made by pro-transparency website Project Veritas, YouTube “blacklisted” a large number of videos on its platform in advance of the referendum while also interfering with search results. YouTube is wholly owned by Google. When voters searched for specific terms on YouTube, the results of their searches were manually altered by Google, thus assuring that the videos selected by Google reach the top of the search results.

Among the searches affected by interference from Google were “irish catholic,” unborn life,” and “abortion is wrong.” The interference in search results came within one week of the referendum, which allowed abortion nationwide. Sources leaked the news to Project Veritas, which was later corroborated by the Breitbart news organization. Some observers have noted that there may be similar manipulation of Google search results with regard to searches related to former secretary of state Hillary Clinton and her use of a non-classified internet server for her top-secret communications during her stint in the Obama administration.
Source: LifeSite

If a hostile country tries to rig an election, we could make structural changes, or even re-do the vote, if necessary.

But if the will of the people itself is being manipulated and corrupted through suppression and the filtering of information gatekeepers don’t want you to see, and promotion of the views you are ‘supposed’ to take, that corrupts the ‘free and fair’ election itself.

Free and fair elections are the pressure valve that makes the people believe their voices are being heard. A regularly-scheduled public uprising against our leaders followed by a smooth transition of power. It’s completely bloodless and as fair as we can make it with those who lose knowing there’s another scheduled uprising not far away in which their team has a shot.

If you manipulate this process so that the public loses faith in their voice being heard… the remaining recourse is a lot more grisly.

Silicon Valley should be really careful about throwing around the words ‘Civil War’ — this is the kind of mischief that could actually start one.

We’ve all seen the dishonest games the left have played with the power they’re entrusted with, they’re obviously unworthy of that trust.

But what about 2020? Could a moral person pull a lever for Trump with their integrity intact? Would Jesus himself vote for Trump? We’re glad you asked. There’s a brand new book that covers precisely that question:

“Would Jesus Vote For Trump?” by Doug Giles and Brandon Vallorani. 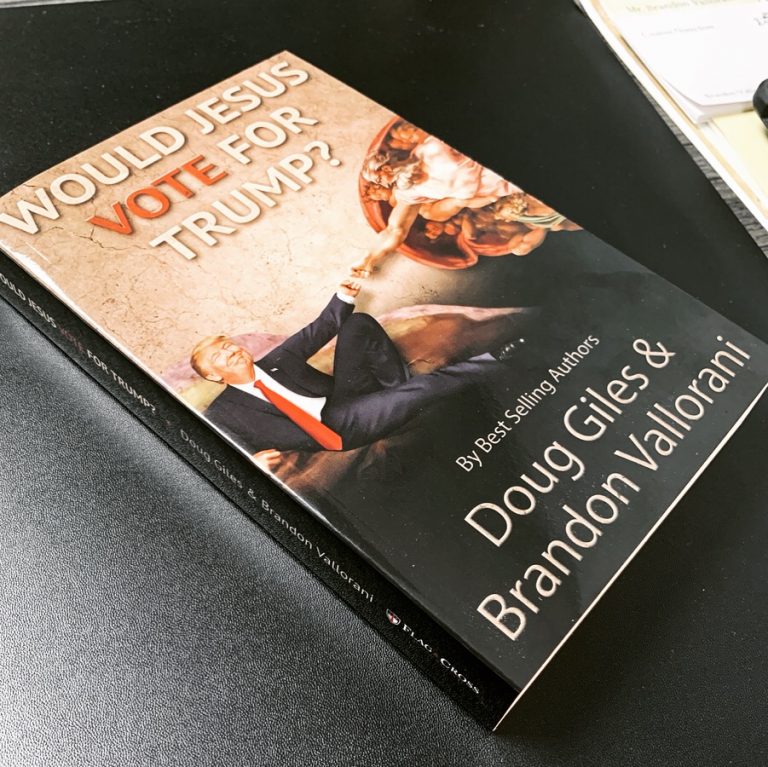 Would Jesus ever choose someone, with a less than stellar past, to be a leader? Would Jesus be cool with how Trump blasts CNN, The Left, and his feckless ‘compadres’ on The Right? What about Health Care? Would the Great Physician give Trump’s opposition to ObamaCare the ‘two thumbs up?’ Find out in this BEST-SELLER!

Get it HERE today.

By the way, since Facebook has unpublished ClashDaily’s page, your best bet to keep in the loop is to Subscribe to our ClashDaily Newsletter right here:

But, you know us here at Clash, we don’t give up that easily. We’ve set up an outpost behind enemy lines. If you’re still on Facebook, check out our brand new ClashBriefing page.

We’ve also moved to a new social media platform, MeWe. It’s like Facebook without the data breaches and censorship.

Sign up and you can still get all the ClashDaily goodness by joining our MeWe group.