Jack Phillips dropped his federal lawsuit after the State backed off: “Today is a win for freedom. I’m very grateful and looking forward to serving my customers as I always have: with love and respect” 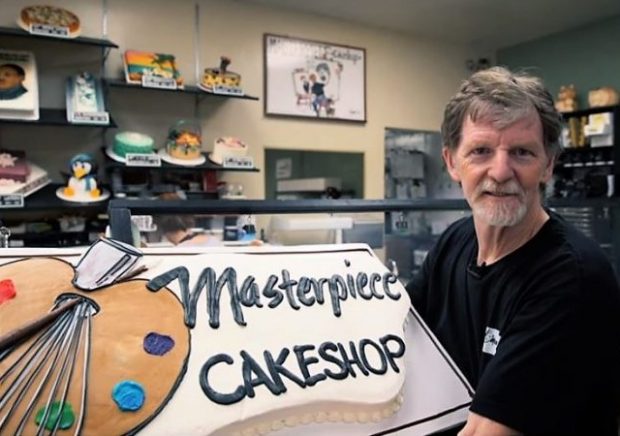 The second attempt by the State of Colorado to punish Jack Phillips and his Masterpiece Cakeshop has come to an end, once again, with a victory for the baker.

The baker also refused to create Halloween cakes and other cakes whose messages he viewed as religiously unacceptable. He didn’t refuse to sell to LGBT people, he just didn’t want to have to create the message. He won the case in the Supreme Court, mostly on procedural grounds with the court not reaching the larger constitutional issues of freedom of religion and freedom of speech (to avoid compelled speech).

Round 2 was when the State went after him because he refused to create a cake celebrating a transgender transition. We covered the lawsuit in Colorado goes after Masterpiece Cakeshop again – this time over “gender transition” cake:

On June 26, 2017, the very same day the Supreme Court agreed to take the Masterpiece Cakeshop case, Attorney Autumn Scardina called  the cake shop to request a “gender transition” cake. The cake shop declined, so on July 20, 2017, Scardina filed a complaint, with the Colorado Civil Rights Commission….

It appears that Colorado waited for the Supreme Court ruling in the wedding cake case, because it was not until June 28, 2018, that the Colorado Civil Rights Commission issued a finding of probable cause…

The Introduction to the [Bakeshop’s federal lawsuit] Complaint (pdf.) … argues that the cake shop was targeted by the claimant/lawyer and Colorado….

The Complaint focuses on the message that was demanded of the cake shop:

184. After the lawyerdisclosed the design and message of the desired cake, Masterpiece Cakeshop politely declined the request because Phillips cannot in good conscience express the messages that the cake would have communicated (i.e., that sex can be changed, that sex can be chosen, and that sex is determined by perceptions or feelings) or celebrate the event that the cake would have commemorated (i.e., the announcement of a change from one sex to the other based on perceptions and feelings).

185. Phillips would not create a custom cake that expresses those messages for any customer, no matter the customer’s protected characteristics.

187. When Masterpiece Cakeshop told the lawyer that it could not create the requested cake, the lawyer asked the shop’s representative to repeat that statement so that someone listening over the speaker phone could hear it.

188. Masterpiece Cakeshop offered to create a different custom cake for the lawyer or to sell the lawyer any of the pre-made items available for purchase in the shop.

199. The Division acknowledged Masterpiece Cakeshop’s position that it declined to create that custom cake because Phillips did not want to express through his cake art “the idea that a person’s sex is anything other than an immutable God-given biological reality.” Scardina v. Masterpiece Cakeshop Inc., Charge No. CP2018011310, at 3 (Colo. Civil Rights Div. June 28, 2018) (Ex. A).

212. As a general matter, if a discrimination complaint is filed against a Colorado cake artist for declining to create a custom cake expressing a message he or she opposes, Colorado defers to the cake-shop owner’s message-based objection and, consistent with what state law requires, does not “presume” that the owner discriminated against the customer based on his or her protected status. Colo. Rev. Stat. § 24-34-305(3).

213. But if a discrimination complaint is filed against Phillips for declining to create a custom cake expressing a message that conflicts with his faith, Colorado rejects his message-based objection and presumes that he discriminated against the customer based on his or her protected status

The case then worked its way through the federal court.

Significantly, a preliminary injunction hearing was scheduled for March 14-15, 2019. That hearing date may have put pressure on the State, because the State dropped the administrative case against the Cakeshop, and the Cakeshop agreed to drop the federal lawsuit.

The Stipulation of Dismissal (pdf.) in the federal lawsuit provided:

On March 5, 2019, the Colorado Civil Rights Commission unanimously entered an order dismissing with prejudice the administrative proceeding Scardina v. Masterpiece Cakeshop, Case No. CR 2018-0012, Charge No. CP2018011310. In light of that action by the Commission, Plaintiffs have agreed to dismiss this case. This dismissal resolves the issues between the Parties to this litigation as set forth in Plaintiffs’ First Amended Verified Complaint. Doc. 51. In light of this joint stipulated dismissal, which is with prejudice as to all claims arising out of or relating to Scardina v. Masterpiece Cakeshop, the Parties respectfully request that the Court vacate all remaining deadlines, including the preliminary injunction hearing presently set for March 14-15, 2019, and close this case. Each Party will bear its, her, or his own costs and attorney fees.

The Court today accepted the parties stipulation, and entered an Order of Dismissal (pdf.):

ORDERED that all claims asserted by Plaintiffs against Defendants are DISMISSED WITH PREJUDICE, with each party to bear its own costs and expenses, including any attorneys’ fees. It is

FURTHER ORDERED that Plaintiffs’ Amended Motion for Preliminary Injunction and Memorandum of Law in Support (ECF No.  04), Defendants’ Motion for Partial Reconsideration of the Order Denying Motion to Dismiss [Doc. 94] Pursuant to Fed.R.Civ.P. 59(e) and 60(b)(1) (ECF No. 107), and Plaintiffs’ Unopposed Motion to Restrict Public Access to the Reply in Support of Amended Motion for Preliminary Injunction and Accompanying Exhibits (ECF No. 132) are DENIED AS MOOT. It is FURTHER ORDERED that the preliminary injunction hearing set for March 14-15, 2019 and all other deadlines are VACATED. It is

FURTHER ORDERED that the Clerk of the Court is directed to close this case.

So Round 2 is over. Masterpiece Cakeshop prevailed.

The Colorado Attorney General’s office today announced that the State and Masterpiece Cakeshop have mutually agreed to end their ongoing state and federal court litigation.

Under the terms of the agreement, the Colorado Civil Rights Commission will voluntarily dismiss the state administrative action against Masterpiece Cakeshop and its owner, Jack Phillips, and Mr. Phillips will voluntarily dismiss his federal court case against the State. Each side will bear their own costs and attorneys’ fees. This agreement does not affect the ability of Autumn Scardina, the complainant in the state administrative case, to pursue a claim on her own.

“After careful consideration of the facts, both sides agreed it was not in anyone’s best interest to move forward with these cases. The larger constitutional issues might well be decided down the road, but these cases will not be the vehicle for resolving them. Equal justice for all will continue to be a core value that we will uphold as we enforce our state’s and nation’s civil rights laws,” said Weiser, whose office represents the Commission and the director of the Colorado Civil Rights Division.

The Commission’s vote to dismiss the state administrative case was unanimous.

Six years, one U.S. Supreme Court ruling, and a second lawsuit later, the state of Colorado has finally stopped its hostility toward cake artist Jack Phillips and his faith.

Today, the state officially agreed to dismiss its case against Jack.

This is a big win for Jack – and for religious freedom! Praise God! It has been a long, difficult journey for Jack. He has endured not only multiple drawn-out legal processes, but also hate mail, nasty phone calls, and even death threats. Yet through it all, God has proven faithful. And now, we hope that Jack can finally move on….

The state’s decision to dismiss its most recent prosecution of Jack is HUGE! And it’s certainly been a long time coming.

But we shouldn’t let this victory lead us to complacency.

Jack has been targeted multiple times by customers seeking to harass him, including people requesting cakes celebrating Satan. And it wouldn’t surprise us if Jack is harassed again because of his faith.

The targeting of the Cakeshop has cost it business, but not yet put it out of business:

“Today is a win for freedom. I’m very grateful and looking forward to serving my customers as I always have: with love and respect,” Phillips told Fox News, adding that he never imagined this chapter of his life — which has cost him over 40 percent of his business — when he opened up his cake shop years ago.

Let’s see if Colorado starts Round 3. You know it wants to.

Nielsen declares migration crisis ‘spiraling out of control,’ warns it will get ‘even worse’