Pelosi says Trump is always in her prayers. One could only imagine in this political climate how she prays. 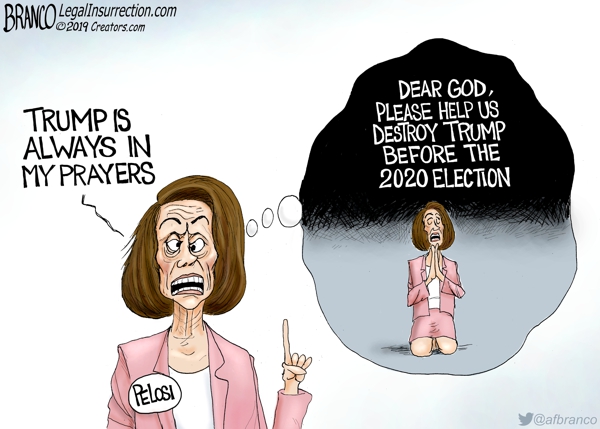 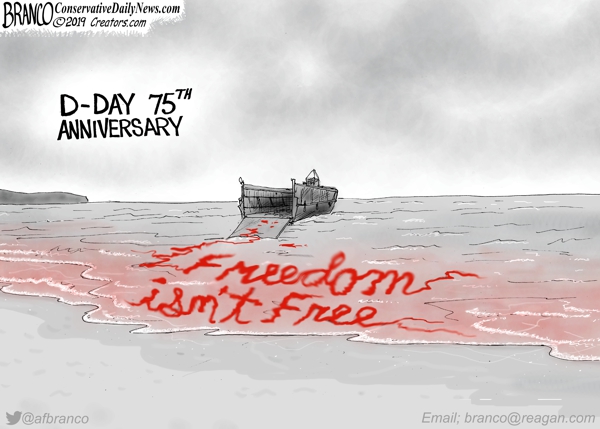 Joe Biden known for plagiarizing years ago in a past presidential campaign, he’s been caught plagiarizing again. 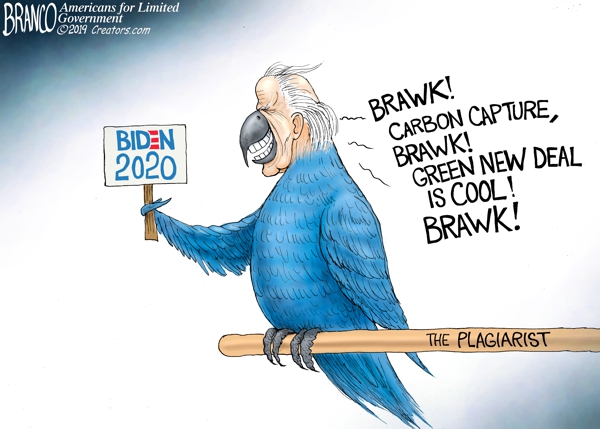 A.F. Branco has taken his two greatest passions, (art and politics) and translated them into the cartoons that have been popular all over the country, in various news outlets including “Fox News”, MSNBC, CBS, ABC and “The Washington Post.” He has been recognized by such personalities as Dinesh D’Souza, James Woods, Sarah Palin, Larry Elder, Lars Larson, the great El Rushbo, and has had his toons tweeted by President Trump

Two Offerings from A.F. Branco in Honor of Memorial Day 2018 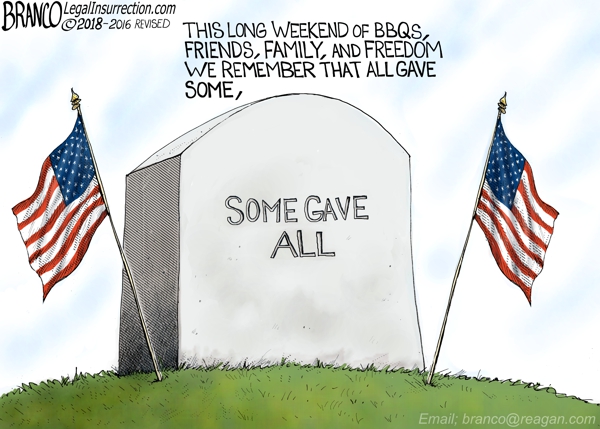 Memorial Day 2018. Remembering those who have who never came home so that we could be free to enjoy our freedoms. 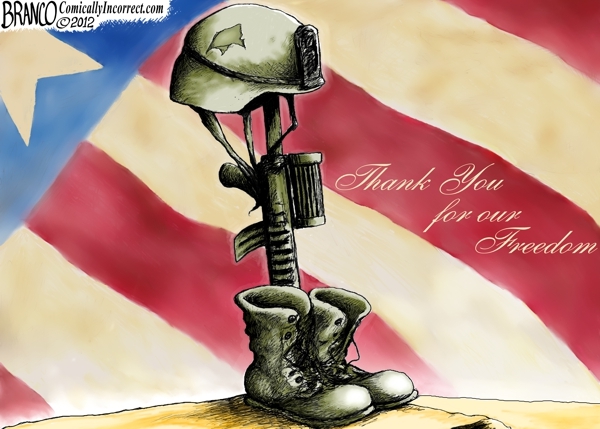 Each year during Memorial Day weekend, nearly one million motorcyclists and spectators participate in the Rolling Thunder “Ride for Freedom” in Washington, D.C. to honor our nation’s fallen and missing heroes — and each year since 2002, one dedicated Marine stands in the middle of the parade to salute the riders.

For the past 16 years, Staff Sgt. Tim Chambers has stood in the middle of 23rd Street near the Lincoln Memorial and Vietnam Wall where he shows his appreciation to each passing rider, many of whom served in the U.S. Armed Forces themselves.

However, the patriotic demonstration in 2016 was particularly awesome, as Chambers brought along a special guest — his bride.

Chambers and Lorraine Heist exchanged vows and toasted the crowd with cans of Budweiser on Sunday, May 29, 2016 in the Marine’s usual 23rd Street spot just before the annual Rolling Thunder ride commenced, according to The Daily Wire.

The excitement of getting married didn’t stop Chambers from taking on his role as “The Saluting Marine,” and this time, he was joined by his wife who also waved at the passing riders with appreciation for their patriotism.

“For me, this annual POW/MIA demonstration is all about doing what is right for the men and women who were sent to war and never came home and the families left behind,” Chambers wrote in a special piece for the Washington Times. “We owe nothing less than accountability and closure.”

The Marine explained how he “accidentally” found out about the Rolling Thunder in 2001 when he was stationed at the Pentagon and visited the Korean War Veterans Memorial during Memorial Day weekend. The next year, Chambers returned to the same spot in full dress and walked around thanking veterans and families for their sacrifices, but he wanted to do more.

“I marched into the middle of the street and popped up the salute,” he said. “The riders passed by me on both sides, and soon I could see tears running down some of their cheeks. I was reaching them.”

Even when he became weary, as the ride can last up to five hours, Chambers remained standing and saluting — acknowledging a “sacred connection” between him and each biker.

“At the end of my first salute in 2002, hundreds of veterans thanked me for giving them a ‘welcome home’ they never received,” he said.

The year Chambers chose to dedicate his wedding day to the patriotic demonstration, his new wife stood for hours in her wedding dress welcoming and thanking the patriots alongside her Marine husband — an act that didn’t go unnoticed.

A widow whose husband had committed suicide after he returned home from war was participating in the parade that year and stopped to hug Chambers’ wife.

“She informed Lorraine that she was standing for her!” the Marine wrote about the encounter on his website. “Very powerful and put it in perspective for both of us.”

He also noted that his bride looked “so amazing” in her wedding dress and said he was “so lucky” to have a woman who supported his efforts as the Saluting Marine.

URL of the Original Posting Site: http://www.glennbeck.com/2015/05/28/hollywood-star-caught-on-tape-teaching-his-kid-something-awesome-about-america/?utm_source=glennbeck&utm_medium=contentcopy_link
It’s kind of sad that a video like this out of Hollywood is an exception rather than the norm, but that doesn’t make the moment any less touching. Chris Pratt, star of ‘Guardians of the Galaxy’ and ‘Jurassic World’, spent Memorial Day teaching his son the Pledge of Allegiance. It’s something we all take for granted, but we don’t often see the moments where we learn something so important to our lives as Americans caught on camera. “Meant to post this on Memorial Day but I was in China and my phone wasn’t working. I’m proud to be American. I’m blessed to get to travel the world!” Chris wrote on Facebook.

The video went mega-viral after he posted, and has already racked up over a million views.

Virtually all Americans come together on Memorial Day to honor those who paid the ultimate sacrifice for the country’s freedom and safety. Two Council on American-Islamic Relations’ officials spent the holiday weekend differently: Questioning whether U.S. troops deserve to be honored and tweeting that the country was “established upon white supremacy.”

The Council on American-Islamic Relations (CAIR), a group labeled by the Justice Department as a U.S. Muslim Brotherhood entity and unindicted co-conspirator in a terrorism-financing trial, disingenuously claims that it is a moderate organization.

A worldwide Islamist organization founded in Egypt in 1928 by Hassan al-Banna that seeks to implement Sharia-based governance globally.

Yet, on May 23, Zahra Billoo, the radical executive-director of CAIR’s San Francisco Bay Area chapter, tweeted that she “struggles with Memorial Day each year” about whether to honor American soldiers who died in wars:

She also quoted another CAIR official, Dawud Walid, the executive-director of CAIR’s Michigan chapter, as questioning whether they should honor American soldiers that died in “unjust” wars and occupations. That’s a direct insult to American soldiers currently serving in Afghanistan and those that have returned from Iraq, as CAIR officials consistently describe those wars with that terminology. Billoo quoted Walid as saying:

Billoo did, however, find one “soldier” she felt comfortably honoring. On May 26, she promoted an article from the anti-Semitic and anti-American Nation of Islam that asked for help for a “black liberation soldier” named Imam Jamil al-Amin:

Religious authority figure; usually the leader of a mosque.

Al-Amin was a member of the Black Panthers terrorist group and was convicted of murdering a police officer in 2000. He is also anti-American, stating “if America doesn’t come around, we’re gonna burn it down,” and “I say violence is necessary. It is as American as cherry pie.”

Al-Amin also said, “When we begin to look critically at the Constitution of the United States . . . we see that in its main essence it is diametrically opposed to what Allah has commanded.”

Al-Amin is considered to be a political prisoner by radical groups like the Nation of Islam, the Sankore Institute of Islamic African Studies International and now, at least one CAIR leader. The extremist cleric viewed America as intrinsically evil from its very foundation. Al-Amin’s theme is similar to other tweets written by Billoo and Walid over Memorial Day Weekend. On May 24, as Memorial Day Weekend was beginning, Walid shared his thoughts that America is a fundamentally racist country:

On May 4, Billoo re-tweeted two opinions that America is inherently murderous:

The tweets are offensive and disturbing, but they are not unprecedented. In March, the Clarion Project reported on how Billoo and Imraan Siddiqi, chairman of the board for CAIR’s Arizona chapter, were sending out tweets depicting the U.S. military as “occupiers” and “murderers.” The tweets outraged the American-Islamic Forum on Democracy (AIFD), a Muslim group opposed to Islamist extremism. Its leader, Dr. Zuhdi Jasser, served in the U.S. Navy. “It is plain to see, however, that they [the CAIR officials] have nothing but disdain for our armed forces. We do hope that Muslim members of the U.S. military realize that CAIR sees you as ‘occupiers,’ not patriots protecting the freest nation on earth,” the AIFD said.

This is what some CAIR officials are saying publicly. If these are the views they feel comfortable expressing openly, then how extreme are the views expressed privately?

Update: 05/27/2014 – Zahra Billo has since deleted her tweet about struggling with Memorial Day. Screenshots of the original tweets are provided in this article.

RONALD REAGAN | One Nation Under God