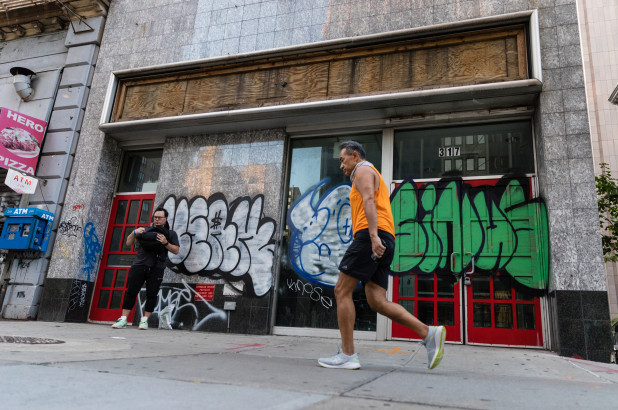 
Democrats and the media immediately set about disputing Trump’s labeling of the border situation as a “crisis,” part of their overtly biased effort to instantly “fact-check” every word or statistic uttered by the president in the brief speech, and — coincidentally? — all seemed to arrive at the same conclusion: There is no real crisis at the border, only a “manufactured crisis” brought about purposefully by Trump’s actions, or some such nonsense like that.

Of course, to follow along with the media’s bouncing ball on this one, everyone must ignore the fact that the same liberal media loudly trumpeted the “crisis” at the border in 2013 and 2014 — when they were supporting comprehensive immigration reform and amnesty for illegal immigrants — or their hollering about a “crisis” on the border through much of 2017 and 2018 when Trump began to crack down on illegal border crossings and deportations ticked up.

In truth, however, the only thing “manufactured” about all of this is the Democrats ‘obstinate opposition to the president and their refusal to acknowledge the basic and undeniable facts of what is occurring on and around the porous and lightly defended southern border.

Case in point, Reuters reported on Thursday that at least 20 dead bodies — 17 of which had been badly burned — were discovered on Wednesday in the Mexican city of Ciudad Miguel Aleman, which is located a mere 56 miles across the Rio Grande River from the U.S. border city of McAllen, Texas, where President Trump visited with U.S. Border Patrol agents and other officials on Thursday.

Mexican authorities are reportedly investigating what has all the appearances of a deadly battle between members of two rival gangs in the area, gangs that routinely play in a role in the illicit cross-border excursions that bring illegal aliens, criminals, drugs, weapons and even terrorists into this nation.

The suspected gang-related massacre even drew a mention from Mexican President Andres Manuel Lopez Obrador at his daily news conference on Thursday, and though he didn’t offer up much in the way of specifics, he did say that security officials would provide more information at a later date or time.

Reuters noted that according to one Mexican security official, five burned-out vehicles were also discovered along with the 20 dead bodies, though the outlet noted that a separate Mexican security official had reportedly counted as many as 21 dead bodies at the scene. The grisly scene was located in the Tamaulipas region of Mexico, one of the more violent states in that nation that has been controlled by dangerous criminal cartels and gangs for years. Those groups exert a great deal of control over drug and human trafficking across the border in that region, and are well-known for running extortion rackets on local residents and exploiting migrants passing through the area for whatever can be gained.

When not engaged in those border-related crimes, the cartels and gangs are fighting violently among each other or waging war against Mexican security forces, violence that has claimed tens of thousands of lives — some innocent, some not so much — over the years.

Obviously, incidents like this one — and this bloody incident is far from an isolated occurrence — are what President Trump is referencing when he speaks of the “crisis” at the border while demanding Congress appropriate the necessary funds to construct a border wall where needed and to increase border security measures in other ways.

Yet, based solely on their reflexive opposition to all things Trump, many talking heads in the liberal media staunchly refuse to acknowledge as a “crisis” what their own colleagues are quietly reporting on a near-daily basis.

Indeed, some in the media have even adopted a sort of “Don’t believe your lying eyes” attitude when it comes to their anti-Trump reporting on the border, as evidenced by a ridiculous tweet from CNN’s Jim Acosta that actually seemed to prove the president’s point about how necessary and effective a border wall truly is.

In several other tweets after that, Acosta hyped up how safe the border town of McAllen is — while studiously ignoring the obvious fact that McAllen is safe because it has a border wall and other barriers obstructing those who would illicitly cross over.

Unfortunately, the wall and other barriers along the border in the McAllen region that keep it so safe only extend for so long, and eventually give way to mere chain-link fencing or nothing at all, meaning those who wish to cross the border illegally need only walk around the end to do so. Anyone with common sense and intellectual honesty can plainly see that and realize Trump is absolutely correct to want to address this security crisis post haste.

Writer and researcher. Constitutional conservatarian with a strong focus on protecting the Second and First Amendments.
Facebook


Nearly 100 members of the notoriously violent MS-13 street gang were among the young immigrants admitted into the U.S. under the classification of “unaccompanied minor” during the past 11 months, according to recent government data.

The immigrants arrested were targeted as part of ICE’s Operation Matador, described by the agency as a “unified effort to combat the proliferation of MS-13 and other transnational criminal gang activity in Long Island, the New York City metropolitan area and the Hudson Valley.”

As of the most recent updates available, the operation has netted 475 arrests for federal immigration authorities.

“Ninety-nine individuals arrested during this operation crossed the border as unaccompanied minors, all of which were confirmed as MS-13 gang members,” the ICE statement read.

The agency went on to confirm that “64 individuals arrested during this operation obtained Special Immigrant Juvenile Status (SIJ) after entering the country, all of which were confirmed as MS-13 gang members.”

According to ICE, receiving the additional designation “provides certain children who have been subject to state juvenile court proceedings related to abuse, neglect, abandonment, or a similar basis under state law the ability to seek lawful permanent residence in the United States.”

The operation utilized resources from federal authorities in the Department of Homeland Security and local law enforcement personnel in New York.

Since the operation began in May, authorities from Hempstead, Piermont, Suffolk County, Nassau County, Rockland County, Sullivan County and Ulster County have assisted DHS in initiating arrests. According to ICE, a majority of the nearly 500 already arrested were “confirmed as gang members and affiliates.” Two of the MS-13 members arrested have reportedly confessed to homicides committed in their home country. One such individual was described by ICE as gang member “from El Salvador who admitted to killing rival gang members at the age of 12 in his home country and assimilated to the gang on Long Island.”

Aside from MS-13, to which 274 individuals belonged, the agency reported that the “most prominent” gang represented was “the 18th Street gang with 15 arrests.” Not only were many of those arrested connected to known street gangs, ICE noted that “80 had additional criminal histories, including prior convictions for assault and weapons charges.” At least five of those individuals “are facing serious criminal charges,” the agency added.

In addition to the broader issue of immigration, President Donald Trump has frequently made it a point to denounce MS-13 as a dangerous entity inside America’s border. He has referred to the gang’s members as “animals,” and in his first State of the Union speech implored lawmakers to “finally close the deadly loopholes” he said have allowed MS-13 members to enter the U.S.