EXCLUSIVE by The Daily Caller: ‘Facilitators of Traffickers’: Guatemalan President Says US Needs To ‘Pressure’ Countries to Stop Flow of Illegal Migrants

GUATEMALA CITY, Guatemala — Guatemalan President Alejandro Giammattei criticized the U.S. government, saying it “should be taking action” and “pressuring other countries” to prevent migrants from outside of Central America without IDs or passports from making their way to the southern border.

If the U.S. took such action to pressure other countries, it would help combat the lucrative business of human trafficking. Guatemala faces many issues with countries like Honduras, which allows illegal migrants without identification from across the globe to traverse before they reach Guatemala, one of the last countries they’ll travel through before they enter Mexico and then the U.S., Giammattei explained. (RELATED: EXCLUSIVE: ‘We Lost Everything’: Afghan Migrants Stuck In Guatemala Have A Message For Biden)

Guatemala, Honduras, El Salvador and Nicaragua have an agreement, called CA-4, which allows the free movement of people with passports from those countries throughout Central America.

“We believe that it is necessary for the United States to exercise political pressure to prevent this from happening. Otherwise, they [the U.S. government] are becoming facilitators of traffickers, a very, very lucrative business for traffickers,” Giammattei said in an exclusive interview with the Daily Caller News Foundation at his presidential palace.

Illegal immigration to the U.S. has surged since President Joe Biden took office and repealed several Trump administration policies used to discourage and deport migrants. U.S. authorities have seen a record of nearly 2.3 million migrants cross the southern border between October 2021 and September 2022.

During fiscal year 2022, there were over 800,000 encounters of migrants from outside Mexico and Central America. 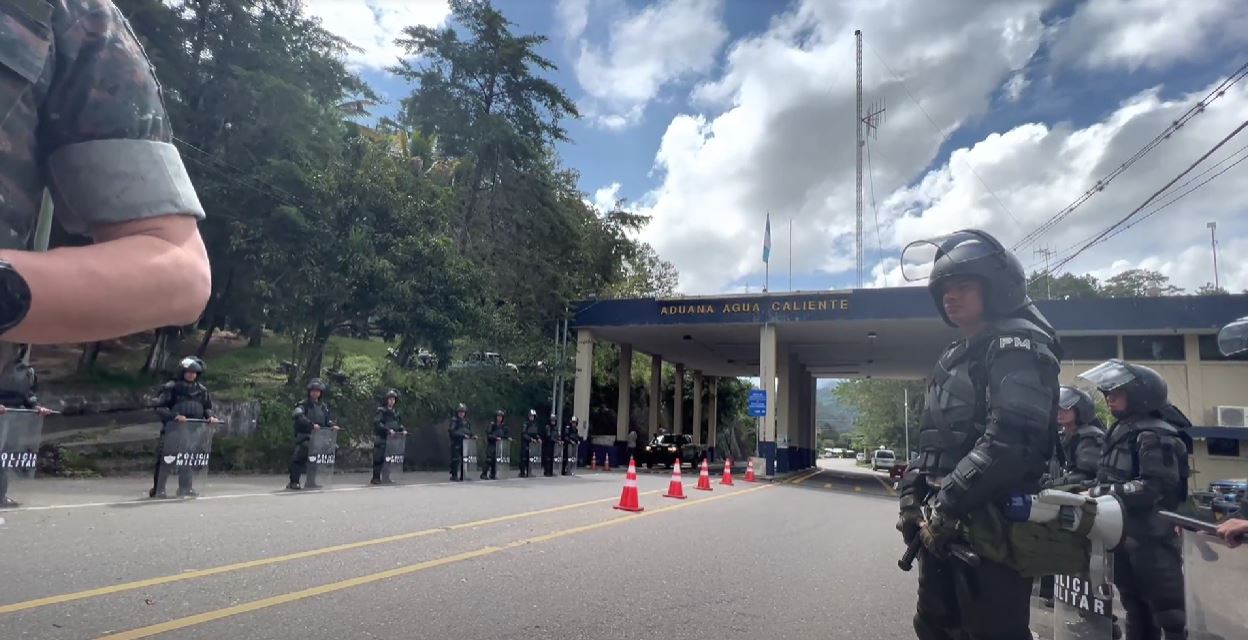 Guatemala has deployed 200 to 300 special forces to push illegal migrants crossing the country’s southern border to Honduras, Giammattei explained. Migrants who don’t have citizenship in Central America and are present without the required documents are considered to be illegal entrants.

“The problem is that Honduras doesn’t want them back. And they are letting them through without a passport. And that is not right. That is violating international laws, because I cannot give free passage to people wanting to cross my country to travel north,” Giammattei said.

“This time, you have the nationals from Haiti, Angola, Afghanistan, Syria, all of them crossing into Guatemala without proper documentation. We in Guatemala cannot issue visas for all of these people. So Honduras is clearly violating international agreements and diplomatic principles. And if this is not a result, we are going to have to take drastic measures,” he added.

One Venezuelan migrant told the DCNF along the Honduran-Guatemalan border that countries take advantage of them for money.

“All of the countries want to charge us,” she said. “They abuse us, simply because we are immigrants. They take away from us what we don’t have.”

“Sadly, we are made to pay because of that. We have to give everything we have. They steal from us, they rape women and others get killed simply for not paying to go through,” she said.

Giammattei condemned the process, saying that countries along the way are allowing traffickers to enrich themselves because of their policies.

“Behind all of this that you see, there’s human trafficking at play,” Giammattei explained. “These people have to pay governments, they have to pay traffickers to get that passage to come through. And, so, we allow people to go through just as has been happening. We are allowing human trafficking. And that is a very lucrative business for these traffickers.”

Guatemala passed a law in February to target traffickers with stronger penalties of up to 30 years in prison. Giammattei said in order to prevent risks to U.S. national security, the Biden administration must take similar action.

The U.S. law penalizes smugglers with decades in prison and sometimes up to life behind bars.

“If we let them go through, we ourselves would be violating our own provisions, which is something that we are not going to allow,” Giammattei said. “We have absolute clarity about what our role is here. And, in fact, we are the only country in Central America that is preventing that safe passage for these illegal immigrants. Other countries are just giving them a pass or just facilitating their crossing without requiring any form of identity. And that represents a serious security problem for the United States.”

The White House didn’t respond to the DCNF’s request for comment.