EXCLUSIVE: Hungarian Foreign Minister Says Ukraine-Russia War Would Not Have Happened Under Trump

WASHINGTON, DC – The foreign minister of Hungary, Péter Szijjártó, in part, blamed the current war between Ukraine and Russia on President Joe Biden in an exclusive interview Wednesday with the Daily Caller. He argued that if the 2020 election had played out differently, there would be no war.

Szijjártó sat down for an interview with the Caller after speaking at the International Atomic Energy Agency’s (IAEA) International Ministerial Conference and discussed a variety of different issues affecting the U.S. and Europe, including the war in Ukraine. Throughout the interview, Szijjártó made it clear he believes that if former President Donald Trump and former Chancellor of Germany Angela Merkel were still in power, the war would not have started.

“The European economy is suffering. Europe is suffering. That is why the only solution for Europe is peace. But definitely, peace will not come with this behavior. What the U.S. administration has been showing. Why? Because in order to create peace, you would need to talk. You would need to communicate,” Szijjártó said during the interview. “And you know, I am usually under very heavy pressure and criticism of why I still talk to the Russians. But, you know, I mean, you cannot afford not to talk to them when you are almost hundred percent dependent on their energy sources and Russia is a reality in Europe, and Russia will remain a reality in Europe regardless of the outcome of this war.”

“So, you know, what we are definitely sure about is that if your presidential election had played out differently in 2020, this war would not have broken out. As much as I can be sure about things that didn’t happen, I am pretty sure that this would have been the case because we are currently, globally speaking, we are currently lacking leaders. President Trump was a real leader. Chancellor Merkel was a real leader. So what I know is that if Chancellor Merkel. And if President Trump had stayed in power, this war, I’m pretty sure, would not have been broken out. So that’s why what we hope is that there will be some American-Russian talks in this regard because don’t be misled. Don’t be misled. This is necessary to create peace. Russian-American talks. 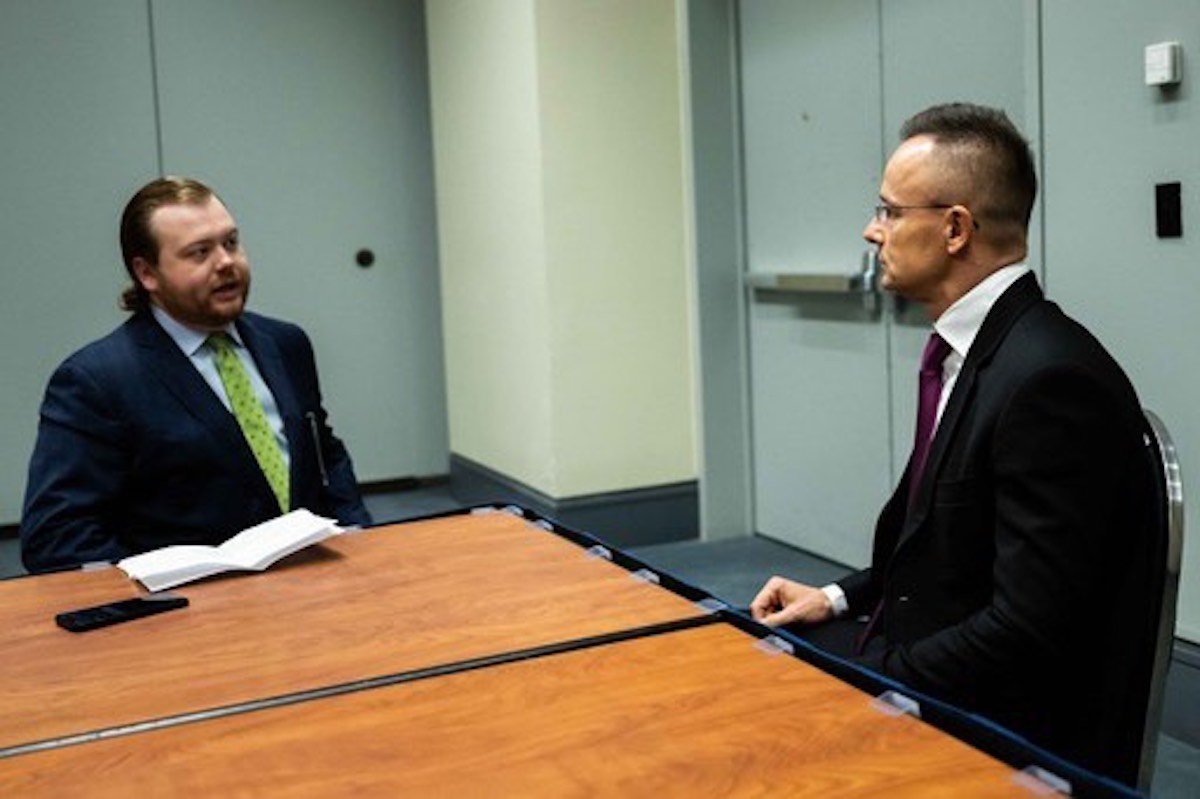 On Monday, a group of 30 Democrats in Congress requested that the Biden administration seek negotiations with Putin. Several have since walked back their support. (RELATED: ‘Easier Dealing With The Taliban’: Hungarian Officials Blast US Over Lack Of Help In Afghanistan Evacuation)

Szijjártó echoed their concerns, however, mentioning the upcoming November G-20 summit in Indonesia, which Biden and Russian President Vladimir Putin are scheduled to attend, as an opportunity for the two leaders to talk. The Hungarian minister’s suggestion comes despite claims that U.S. officials are making sure Biden does talk with Putin, per Politico. Biden himself previously told CNN’s Jake Tapper said he will not meet the Russian president except maybe to discuss American Britney Griner, who is serving a 9-year sentence in Russian prison. (RELATED: EXCLUSIVE: Here’s Why Hungary Is Incentivizing Children, Marriage)

“I do hope that those discussions, which are necessary to finish the war, will take place soon. And I don’t want to degrade anyone, but I am pretty certain that these negotiations must take place between the American and the Russian administration,” Szijjártó said. “And, you know, I hope that both of them will behave responsibly because I understand that there will be a G20 meeting. I understand that there is a chance that both of the presidents might be there. And to be honest, I think it would be very, very complicated to explain to the world from both perspectives, why they have not met, if they. If they are on the same place. So, you know, we in Hungary cannot do anything more than just wish, hope, and pray.”

“I want to underline that I really do believe and think that if he had stayed in power, this wouldn’t have broken out,” he added.

As of Oct. 3, the U.S. has spent 52 billion euros in military, financial and humanitarian aid in Ukraine, according to the Kiel Institute for the World Economy. Hungary has urged an immediate ceasefire and end to the conflict. (RELATED: Hungarian Prime Minister Viktor Orban To Speak At CPAC In Texas)

EXCLUSIVE for The Daily Caller: Migrant Caravans Are Preparing to Flood the US Border Ahead of Midterms, Senior Guatemalan Official Warns