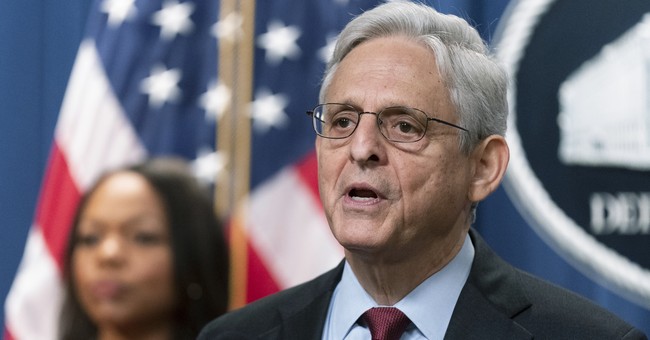 Let’s hope Merrick Garland’s search of Mar-a-Lago is based on more evidence than his indictment of the Louisville, Kentucky, police officers involved in the raid on Breonna Taylor’s house.

That passive construction I just used — “involved in the raid on,” instead of “who raided” — is not sloppy writing: It’s the facts. The officers who actually shot Taylor have not been charged, apparently on the flimsy grounds that they were being shot at when they fired.

Instead, our lunatic attorney general has indicted officers who prepared the affidavit used to obtain the warrant to search Taylor’s home. In the words of the indictment, the affidavit “contained information that was false, misleading and out-of-date … and the officers lacked probable cause for the search.”

Further, the indictment also alleges that the officers knew they were providing false information.

Breonna Taylor, you will recall, was the moll for drug dealer Jamarcus Glover, one of Louisville’s biggest suppliers of cocaine and fentanyl, and therefore by definition a murderer. On March 13, 2020, the police executed simultaneous search warrants on two of his “trap houses” as well as the home of his bagwoman, Breonna.

The man with Taylor, Kenneth Walker, claims he shot at the officers because he thought the guys pounding on the front door and yelling “POLICE!” were home invaders. Skeptics will say that’s implausible, but it is now treated as hard fact in such solid, reliable news sources as The New York Times.

The officers returned fire and hit Taylor, who had the misfortune to be standing next to her boyfriend as he was shooting at the police. Riots ensued. Taylor’s family got $12 million.

Kentucky’s criminal prosecution of the one officer charged ended in an acquittal. With last week’s suit, the federal government is now bringing its own criminal charges against the police — in a sane world, this would be double jeopardy — alleging that the affidavit for a search warrant was based on information that was knowingly “false, misleading and out-of-date.”

Specifically, the feds say the following claims were false:

1. Glover and Taylor had an “ongoing connection”;

While it can be murky determining the precise relationship status and residence of a drug dealer, especially when he works out of three trap houses and has multiple girlfriends, those three claims are not false. They are “true.”

The cops didn’t lie; the indictment does.

1. Did Glover and Taylor have an “ongoing connection”?

Their relationship dates back to at least 2016, when Taylor loaned Glover her rental car, only to have the police show up at her door to ask about the dead body in the trunk. The dead man turned out to be the brother of one of Glover’s criminal confederates.

But that was four years before the raid! Surely, Breonna wised up after the body-in-the-trunk incident and dumped Jamarcus like a hot potato. Right?

Nope! Taylor continued bonding Glover out of jail through his many arrests from 2016 to 2020. He called Taylor from jail at least 26 times during those four years — that can be proven — including on Jan. 3, 2020, three months before the raids. During that call from January 2020, the two talk about sleeping together and exchange “I love you’s.”

On Jan. 2, 2020, police installed a pole camera to observe one of the crack houses in response to numerous violent assaults in the area. The very day the camera went up, Taylor’s car was seen pulling up to the house, dropping off Glover. On Feb. 13, 2020, Taylor drove him there again, and while waiting for him, got out of her car, in full view of the camera.

But this is a dry recitation of police evidence. Glover’s baby mama (not Breonna) is more colorful. In a recorded jailhouse phone call the day after the shooting, she told him: “This b*tch (Breonna) where she’s been with you, since you ain’t been over at my house … the same day you post a picture I guess she post a video, you knew it because she said what’s up she was in the bed with you, you kissing all over her.”

Glover repeatedly assures the irate baby mama that Breonna just kept his money for him — and that thousands of dollars were still at her house.

Now, where in the world would the police get the idea that Glover and Taylor had some sort of “ongoing connection”? It’s a puzzlement.

2. Did Glover use Taylor’s address as his “residence”?

Again, what constituted Glover’s “residence” is a bit of a philosophical question because, in the words of his baby mama, “You bounce back and forth between these btches.”

But he had to give the bank an address. He gave them Taylor’s — as confirmed by the police with subpoenaed bank records they obtained on Feb. 24, 2020, mere weeks before the raids. He also had to give police a phone number when he filed a complaint in February about his car being towed. He gave them Breonna’s number.

To the extent that a major coke dealer with a string of ladies has any fixed address, Glover’s address was Taylor’s house.

This one’s the easiest to answer. The police had photos of Glover carrying a USPS package from her house on Jan. 16, 2020. His car pulls up, he walks into her house empty-handed, then emerges carrying the USPS package. (Whereupon, he drove directly to a trap house.)

The hilarious part of this charge is that according to the indictment, it is based on the word of U.S. Postal Inspector Tony Gooden, who has been giving interviews all over, saying that in January 2020, his office investigated whether any “potentially suspicious packages” were being sent to Taylor’s house. But after a thorough investigation, he reported, nope, no suspicious packages!

That search must have been exhaustive!

Even the lawyer representing Taylor’s family wasn’t stupid enough to deny the packages. Amid a blizzard of fanciful claims about Taylor and Glover’s relationship — They’d broken up years ago! They barely stayed in touch! — the lawyer admitted that Taylor “accepted packages” for Glover.

Yeah, we know. There are pictures. The only people who don’t know are the Louisville postal inspector and the attorney general of the United States.

This fall, the Democrats will try to convince you that they support the police. Why, look at how well we treated the cop who shot Ashli Babbitt! Never forget that this is the party that spent 2 1/2 years — and counting! — trying to destroy Louisville police officers for risking their lives to take down a major drug ring.