President Joe Biden’s Department of Education (DOE) is expected to roll out new Title IX rules that will expand the definition of sex to include gender identity, which experts say will have legal and cultural implications for all aspects of American education.

The Office of Civil Rights (OCR) is planning to take an unprecedented step to expand the definition of sex to include gender identity under Title IX of the 1972 Education Amendments, a key civil righs law which ensures no person is discriminated against under any federal education program or activity “on the basis of sex.” The rule change will require every sex-separated space, program, building, bathroom and locker room to accommodate individuals “who may feel as though they are women, even though biologically, they are men,” Sarah Perry, a senior legal fellow for The Heritage Foundation, told The Daily Caller News Foundation.

“What we saw with Lia Thomas at the NCAA Championships will now be happening at schools and colleges across the country if they receive so much as $1 of federal funding from the Department of Education,” Perry said.

Gender Is Not an Immutable Characteristic

The OCR has already indicated it will enforce Title IX to include discrimination based on sexual orientation and gender identity in what it says is consistent with the 2020 Supreme Court case, Bostock v. Clayton County, Georgia, which extended workplace sexual harassment and discrimination protections to LGBTQ employees. The Biden administration is using the Bostock ruling as its basis for all other modifications of civil rights law, Perry said. Although, the decision specifically noted that the Supreme Court did not “purport to address bathrooms, locker rooms, or anything else of the kind.” The high court has relied on the concept of immutability, which encompasses characteristics like race, national origin and sex, for decades, Perry explained. But now, the Biden administration is attempting to “shoehorn” an expansive definition of sex into Title IX, which she said was specifically drafted to protect biological women and girls, giving them all the rights that men already had.

“What this does is ultimately open up what has been long standing, successful application of federal civil rights law to individuals who happen to feel like a woman or feel like a man at any given time or at any given space,” she said. “We have never before in American civil rights law offered federal legal protections for an individual based on how they FEEL subjectively and internally.”

Once gender, which is not an immutable characteristic, becomes a protected class the same as race, “you’re running up against the freedom of individuals to say … ‘I don’t agree that you are a woman if you were born a biological male,’” Jonathan Butcher, an education fellow at The Heritage Foundation, told TheDCNF. “If you express that opinion, you would be violating federal law.”

Perry described the rule change as an unprecedented and illegal expansion of the law that would implicate free speech by forcing individuals and institutions to provide biological men who identity as female with access to women’s restrooms, sports teams and schools. By expanding civil rights law, the Biden administration is muzzling “individuals who believe sex is immutable and biological … it shuts those people up, utterly silencing dissent in the education context,” Perry said.

Max Eden, a research fellow for the American Enterprise Institute, said officials in the Biden administration aim “to change culture, not just discriminatory treatment.” Under the new rules, any student will now be able to level an accusation of gender discrimination against their school, forcing institutions to become gender affirming, he said. 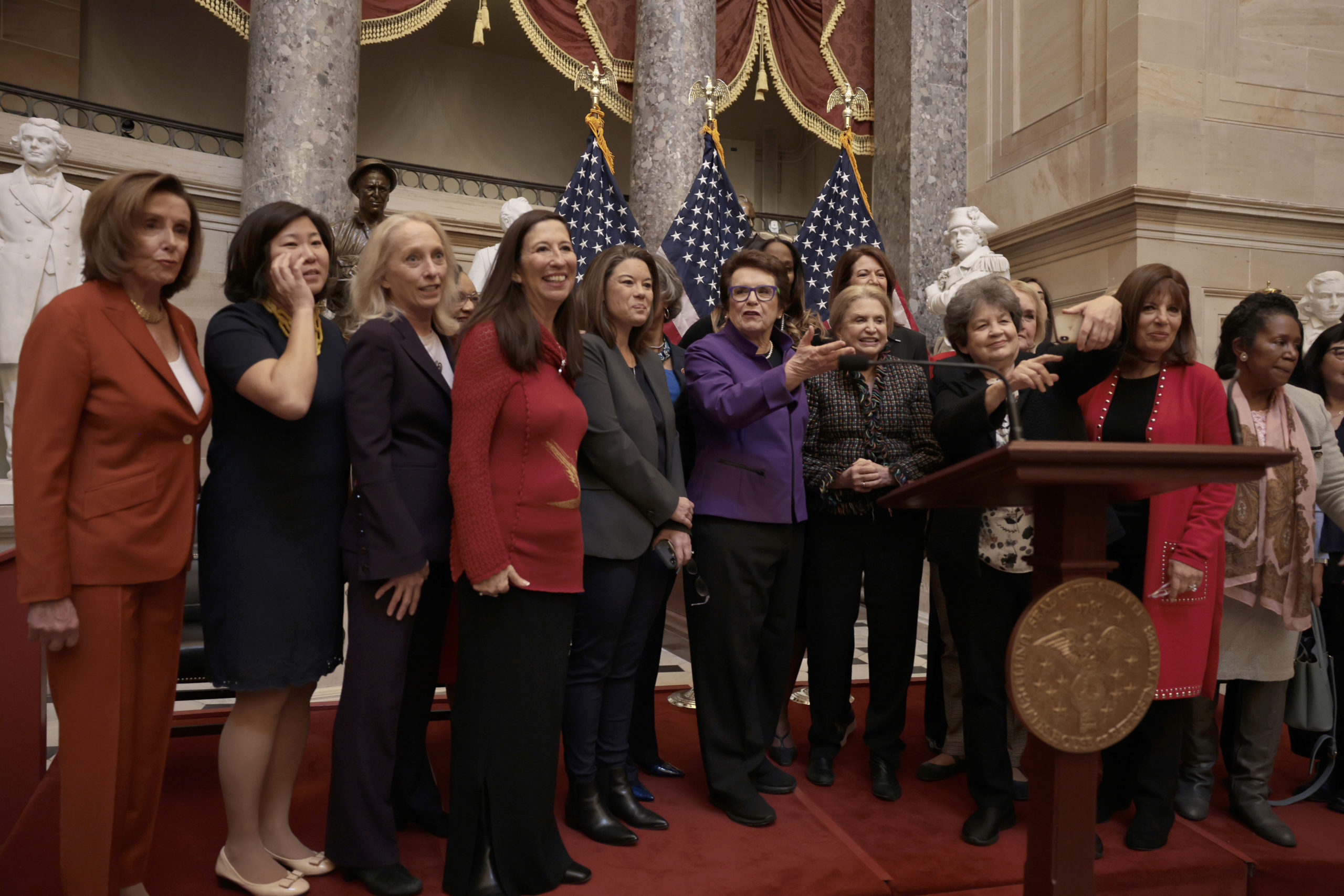 Speaker Pelosi held an event to celebrate women athletes to honor the 50th Anniversary of the passage of Title IX. (Anna Moneymaker/Getty Images)

States have enacted legislation that bars biologically male students from competing in women’s sports, restricts doctors’ abilities to provide transition services to minors and prohibits certain discussions of sexual orientation and gender identity in elementary classrooms. The conflicting legislation will set up a “battle royale” in the federal court system to test whether the regulation of a federal agency is more powerful than a democratically passed and enacted state law, Perry said. A coalition of 15 Republican-led states have already signaled that they will take legal action if the OCR’s rewritten rules conflict with existing state law.

If the Biden administration does formally achieve its Title IX goals, it “begs the question whether or not they will go beyond the issues of bathrooms and sports teams and get to the real crux of the issue of coercing public schools to teach and operate that this ideology is true,” Eden said.