Ann Coulter Op-ed: Dem Nightmare: What if the War Ends Before November? 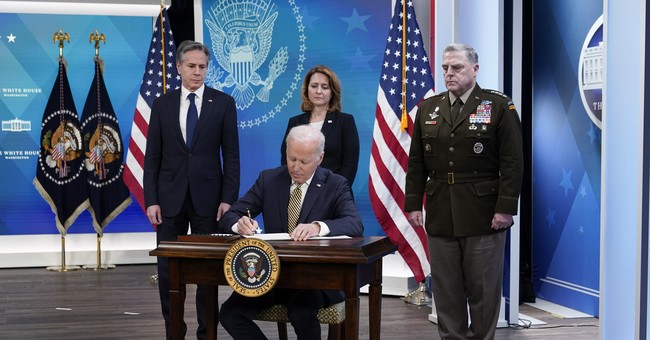 Great news for Joe Biden. After months of abysmal public approval numbers, President Biden’s favorability among registered voters has soared by 2 points to 45%! And all he had to do was bring us to the brink of World War III.

The media are thrilled with the possibility of nuclear war with Russia. Catastrophes are terrific for ratings, and flood-the-zone coverage of a war between two faraway countries that has almost zero effect on the lives of most Americans allows journalists to act like deep-think, geopolitical strategists (after having quickly looked up “Ukraine” on Wikipedia).

Of course, when American kids are murdered expressly as a result of our own government’s policies, the journalism protocol is: No crying, no coverage.

There will be no tears for the 5-year-old Florida girl killed in October when an illegal alien from Guatemala, Ernesto Lopez Morales, tanked up on six 32-ounce beers, then plowed into the little girl and her mother as he was driving to get more beer.

Nor for Texas teenager Adrienne Sophia Exum, killed instantly one Sunday afternoon in 2020 when Heriberto Fuerte-Padilla, an illegal alien from Mexico, smashed into the car she was driving, then fled the scene. There’s even some news: The Biden administration announced that Fuerte-Padilla will not be deported.

And there will be no weeping for the still-unidentified mother and daughter, aged 59 and 22, killed last December when a human smuggler (a “U.S. citizen,” aka “anchor baby”) carrying six illegals across the border into Texas, sped through a stop sign and T-boned the pair.

I’m sure it’s just a coincidence, but the media’s obsessive focus on Ukraine is terrific for the interests of the Democratic Party. Recall that, in his 2012 book, “Left Turn: How Liberal Media Bias Distorts the American Mind,” then-UCLA professor Tim Groseclose demonstrated that media bias alone costs Republicans about 8 to 10 percentage points in elections.

Until the war in Ukraine, the Democrats were facing midterms after having spent the previous two years mandating masks and an endless series of vaccinations — even for the vaccinated or previously infected.

Democratic district attorneys have turned city after city into feces-smeared murdertopias that make Charles Bronson’s “Death Wish” look like “The Sound of Music.”

What could even Stalin’s media do with that record?

Option 1) Implement a collective mind wipe, perhaps through an electromagnetic pulse, to erase voters’ memory of everything that’s happened since Joe Biden was sworn in.

Option 2) WAR! (Someplace in the world that’s not here.)

What crisis at our border? We’re reporting on a WAR.

How can you talk about murder rates when CHILDREN ARE DYING IN UKRAINE?

What vaccine mandates? COVID is over. Now we’re talking about war!

Everything bad that’s happening is Putin’s fault! He’s like Hitler!

By now, the media have whipped the public into such a frenzy over Ukraine that a majority of Americans want the U.S. to start shooting down Russian planes, starting World War III with nuclear armed power.

A small price to pay for Democratic dominance.

But much like American military interventions around the globe, things don’t always go as planned.

The Democrats’ media helpers might want to recall President George H.W. Bush’s 89% favorable rating in 1991 — the highest presidential job approval rating then on record, according to Gallup.

Those astronomical numbers came as a result of the conclusion of the Persian Gulf War, when we went to war with Saddam Hussein because he had invaded neighboring Kuwait — violating that nation’s sacred sovereignty! — and proceeded to commit unspeakable war crimes, including using poison gas. The first week of that war, Bush’s poll numbers shot from 64% to 82%.

And then it all collapsed. By Election Day 1992, Bush’s public approval rating was down to a pathetic 34%. The h*rny hick won the election, and Bush became an embarrassing one-term president.

On the military side, at least the Middle East was finally at peace. We never heard a peep out of Hussein again. Wait — what happened?

Biden: Everybody Knows Someone Whose Friend Has Taken Naked Pictures of Them and Blackmailed Them