Ann Coulter Op-ed: The Message in the Polls: Trump’s Done

The opinions expressed by columnists are their own and do not necessarily represent the views of Townhall.com, and WhatDidYouSay.org/ 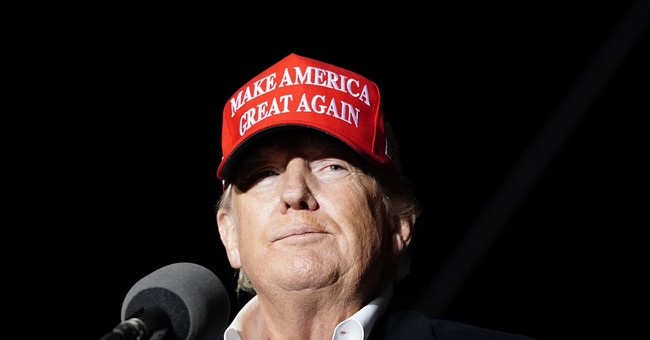 Amid the hourly, annoying group emails to Trump’s list — “YOU are one of my TOP supporters!” — there was one from Roger Stone on Nov. 2, 2021, denouncing DeSantis.

The insults sounded a lot like what Trump used to say about Stone: “Ron’s own piss-poor campaign …,” “without really delivering on his Trump-like rhetoric …,” “Governor DeSantis has failed …” and so on.

The title of this diatribe was: “WILL RON DESANTIS TAKE THE PLEDGE?” Can you guess what “the pledge” is? That is correct: not to challenge Trump for president in 2024.

Only because it was “from” Stone, a smart guy who sadly prostrated himself on the altar of Trump, did I open it. Then, I shook my head and deleted it.

Evidently, others on the Trump email list responded with more rancor.

One week later, Stone sent out a follow-up email frantically backpedaling, noting that “many” recipients of his recent email were “surprised” by his attacks on DeSantis. The crow-eating letter ended by pleading with Stone’s critics to “Please take a moment to read what I have actually said …”

That must’ve been some blowback!

No one wants Trump. He’s fading faster than Sarah Palin did — and she was second place on a losing presidential ticket. In case you don’t remember, for three years following that loss, Palin was packing stadiums with tens of thousands of Trump-like fans.

But by 2011, even she — a far smarter politician than Trump who did not spend her time whining about the last election, wallowing in self-pity or endorsing candidates because they once said something nice about her golf course — had faded. She was fun, but Republicans were starting to think seriously about the 2012 presidential election.

Trump is already two years ahead of Palin’s fade-out schedule. After his petulant endorsements this year deliver loss after loss in midterm elections that ought to be a blowout landslide for the GOP, he’ll be as popular as former Missouri Rep. Todd Akin.

As many Republicans will bitterly recall, Trump has already lost two Senate seats for Republicans in the 2021 Georgia runoffs. So far this year, he’s on track to lose — at least — another Senate race in Georgia, as well as the governor’s mansion.

Sure, thousands of people show up to his heavily advertised rallies, but they’re all the exact same people. His die-hard fans — or, as he calls them, “future Trump University students” — are like Deadheads, following him from venue to venue, dressing up in wild costumes and listening to the same songs.

Some conservatives who would never again vote for Trump wear MAGA hats, but that’s just an identity badge, like liberals wearing masks. Trump happens to be the last Republican president, and the media lose their minds over him. Wearing a “Trump” hat is the most efficient way to say, “Screw you, media.”

This is why the media’s neurotic fixation on Trump is baffling to normal people. TV hosts keep telling us that Trump is wildly popular — the 2024 nomination is his for the asking! — but facts on the ground suggest otherwise.

It turns out the media are using a sleight of hand to claim that Trump is popular with Republicans.

But there’s a lot more to the story. The poll allows readers to view Trump’s approval not only among all voters (-14%) but among specific subgroups of all voters: men, women, Blacks, Hispanics and whites, as well as any combination of these demographic subgroups. And get this: Trump doesn’t have as much as 25% net approval among any subgroup — other than “Republicans.”

I tried whites — the base of the Republican Party (and the demographic that decides every election, despite the unshakable beliefs of GOP donors). Whites have a meager 4% net favorable opinion of Trump.

Maybe it was that massive Hispanic vote for Trump that I’ve been hearing so much about! Hispanics: negative 44% net favorable for Trump. Blacks? Negative 85% net favorable.

How about non-college-educated white men? The beating heart of the Trump base is only 23% net favorable toward Trump.

So how is it possible that 77% of “Republicans” — net — have a favorable opinion of Trump? There’s no other subgroup of the electorate that has even a third of that.

The only explanation is that an awful lot of Republicans are now calling themselves “Independents.”

Maybe it’s because, day in, day out, the media tell us that the GOP is “the Party of Trump”! Apparently, this has led a lot of Republicans to conclude that they must not be Republicans, after all. (At least, among the Republicans contacted by these pollsters. I assume they didn’t have any respondents in Florida, where “Republican” has a much more favorable connotation.)

Thanks to the media’s lies, the only people calling themselves “Republicans” these days are the Trump die-hards. In other words, the blockbuster conclusion of this poll is: Trump die-hards like Trump!

Yes — and they’re the only ones who do. While Trump fanatics are indeed fanatical, everyone else is sick and tired of his nonsense.

Give voters a populist conservative who’s not a conman and a liar and they’ll be “Republicans” again. No wonder Trump hates DeSantis.