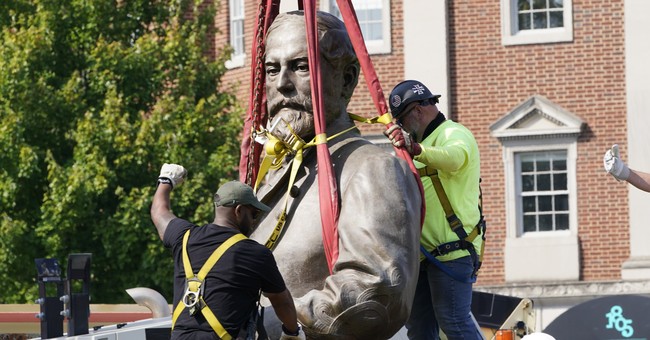 My ancestors were Presbyterian abolitionists who fought on the Union side, but I get really ticked off when imbeciles take a sledgehammer to my country’s history.

Last week, with self-satisfied glee, savages tore down the 14-foot statue of Robert E. Lee designed by the French sculptor Antonin Mercie and installed in 1890 on land deeded to the state — in return for a promise that the Commonwealth of Virginia “will hold said Statue and pedestal and Circle of ground perpetually sacred to the Monumental purpose to which they have been devoted and that she will faithfully guard it and affectionately protect it.”

But Virginia’s supreme court ruled that the state had a “free speech” right to violate the deed. On that theory, no contract can ever be enforced. I have a free speech right to say that I will NOT deliver 20 pounds of bananas!

It’s not just “Southerners” who revere Lee, as his Wikipedia page implies. Franklin Delano Roosevelt called Lee “one of our greatest American Christians and one of our greatest American gentlemen.” Dwight Eisenhower said Lee was “noble as a leader and as a man, and unsullied as I read the pages of our history.” Even Ulysses S. Grant called him “the acknowledged ablest general in the Confederate army.”

The son — not grandson — of a hero of the American Revolution, Lee graduated second in his class at West Point, then distinguished himself in the Mexican-American War. Lee’s reputation was so great that President Lincoln asked him to take command of the Union forces against the South. But Lee was a Virginian and felt compelled to take Virginia’s side, so he resigned from the U.S. Army.

(For my illiterate readers and anyone who gets his news from MSNBC: That makes Lee the opposite of a “traitor.” A traitor is someone who pretends to be on your side, while secretly working with the enemy, not someone who loudly announces, I quit. My friends and I are leaving.)

Among his accomplishments, there’s also the minor fact that Lee saved the country. Immediately after a bitter, bloody civil war, pitting brother against brother — four of Mary Lincoln’s five brothers fought for the Confederacy — the landscape littered with the dead, Lee ensured that the South would accept defeat.

When Lee surrendered at Appomattox, he was at the height of his powers, idolized throughout the South. The president of the Confederacy, Jefferson Davis, wanted to fight on, telling his officers, “I think we can whip the enemy yet, if our people will turn out.”

But Lee, not Davis, held the hearts of his countrymen. When one of Lee’s own officers urged him to lead a guerilla war against the North, Lee remonstrated, “as a Christian people, there is now but one course to pursue. We must accept the situation; these men must go home and plant a crop, and we must proceed to build up our country on a new basis.”

He could easily have pulled a Trump and told his supporters, We got screwed! Take to the hills! They would have followed. Hundreds of thousands more lives would have been lost. The country might never have recovered.

But Lee said no, it ends now.

In his biography of Grant, Ron Chernow says the Union general believed that “had Lee resisted surrender and encouraged his army to wage guerrilla warfare, it would have spawned infinite trouble. … Such was Lee’s unrivaled stature that his acceptance of defeat reconciled many diehard rebels to follow his example.”

Thanks to Lee, we became a functioning country again within about 15 years, instead of becoming Serbia, Afghanistan, Korea, Vietnam, Rwanda and on and on and on.

After Lee’s surrender, Union soldiers saluted their defeated foes. Erstwhile warring officers embraced one another. One Confederate officer said: “Great God, thought I to myself, how my heart swells out to such a magnanimous touch of humanity! Why do men fight who were born to be brothers?” When told of Lee’s surrender, Lincoln ordered the Union band to play “Dixie.” Years later, Grant spoke of his deep affection for Lee’s army, second only to that for his own men.

Never has a civil war ended with such love between the former enemies. That’s our history, our country, our war — North and South, black and white.

The vandalizing of American history has absolutely nothing to do with black people or slavery. Lots of historical figures had slaves. Not only American heroes like Washington and Jefferson, but Kamala Harris’ ancestors — according to her own father. Barack Obama is the only president who might be descended from slave traders, a particularly repellent group, inasmuch as Kenya was a major player in the slave trade.

How about these white saviors demand a box on their Ivy League admission forms: “If admitted to Harvard, would you be willing to give up your place to a black person?” That will NEVER happen. Instead, we get: I went out and courageously defaced a Confederate statue! Because some things are more important than my personal comfort.

No, the moving force behind this frenzied destruction of American history isn’t black people suddenly offended by monuments that have been around for a century; it’s pushy newcomers, bitter that their ancestors had nothing to do with the creation of this country. After other people’s ancestors carved a nation out of the wilderness, they just kind of showed up. Now they go around obliterating anything that reminds them that this country was up and running long before they got here.

America’s leading hate group, the Southern Poverty Law Center, titles its report on Confederate symbols “Whose Heritage? Public Symbols of the Confederacy.” Yes, exactly, it’s not their heritage, so it must be destroyed. My ancestors fought on the Union side, but they were involved, and it matters to me.

MSNBC’s smirking Chris Hayes can get weepy about some ancient Roman ruin, and Rachel Maddow about a building in Warsaw, but I care about my history. These savages are smashing and graffitiing my antiquities.

How would they like it if we took a sledgehammer to “Piss Christ”?

CHRIS PANDOLFO and  LEON WOLF Op-ed: Cash, COVID, and cover-up, part 3: ‘You will have tasks that must be done’