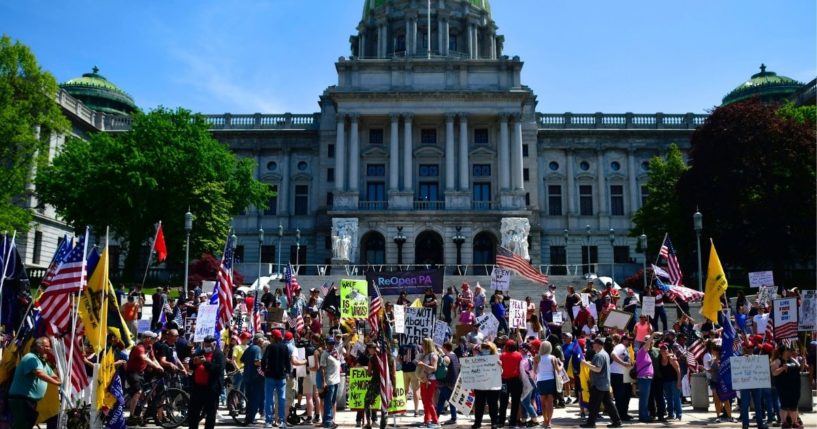 Demonstrators rally outside the Pennsylvania Capitol Building to protest the continued closure of businesses due to the coronavirus pandemic on May 15, 2020, in Harrisburg, Pennsylvania. (Mark Makela / Getty Images)

In one of the first signs that American citizens are cognizant of the country’s dangerous descent into a one-party rule, residents of Pennsylvania sent a powerful message to those responsible on Tuesday: Stop!

The pandemic provided governors, mayors and other local leaders with extraordinary opportunities to expand their influence over the citizens in their states. Nowhere were these emergency powers more egregiously abused than in states, cities and towns governed by Democrats. By all measures, Pennsylvania Gov. Tom Wolf was one of the worst offenders.

The amendment to Article III, Section 9 of the Pennsylvania Constitution grants the legislature the ability to “terminate the Governor’s Covid-19 disaster emergency declaration without presenting it to the Governor for his approval.”

Prior to this amendment, measures passed by both the state House and Senate required the approval of the governor. Needless to say, all of the Republican-controlled legislature’s attempts to end or minimize Wolf’s orders ended in vetoes which required a two-thirds vote in both chambers to override. With the passage of this resolution, a simple majority vote in the state House and the Senate is all that is necessary. Veto power is no longer available to the governor.

Under the old law, the governor had the authority to issue an emergency order which would remain in effect for 90 days, at which point he or she could either renew it or end it. The new amendment stipulates that a “disaster emergency declaration will expire automatically after 21 days, regardless of the severity of the emergency, unless the General Assembly takes action to extend the disaster emergency.”

WHYY noted that a COVID-19 emergency order is currently in effect and is set to expire on Memorial Day. If Wolf chooses to renew it, a simple majority vote in the state House and Senate could end it in 21 days.

Democrats are reportedly worried that the legislature will act “to cancel COVID-19 emergency declarations without considering public health or consulting with the Governor’s office.”

State House Majority Leader Kerry Benninghoff and Speaker Bryan Cutler, both Republicans, sought to reassure them in a joint statement which said, “We stand ready to reasonably and responsibly manage Pennsylvania through this ongoing global pandemic, the scourge of opioid addiction, and other long-term challenges that may come to face this Commonwealth.”

State Republican lawmakers Senate Majority Leader Kim Ward and Senate President Jake Corman were more direct. In a joint statement, they wrote, “This decision by the people is not about taking power away from any one branch of government. It’s about re-establishing the balance of power between three equal branches of government as guaranteed by the constitution.”

Gov. Wolf, unsurprisingly, vehemently opposed these amendments. According to The Morning Call, the governor said in January that “Republicans were injecting partisan politics into emergency disaster response in a ‘thinly veiled power grab.’ Just last week, he warned that the provisions were a threat to a functioning society that must respond to increasingly complicated disasters.”

A thinly veiled power grab? I’m practically speechless. What stunning hypocrisy coming from a man who used the COVID-19 pandemic to trample all over his constituents’ rights by shutting down businesses, halting participation in high school sports, closing schools and mandating mask-wearing outside the home.

Anyway, the governor held a news conference on Wednesday in Pottstown, Pennsylvania. He said he’d spoken to leaders of both parties in the legislature to discuss “a path forward,” the Morning Call reported.

“We’re starting that conversation. You can’t just flick a switch and make the change,” he told reporters. “But the voters have spoken, and we’re going to do what I think the voters expect us to do and make the best of it.”

WHYY reported the Pennsylvania Emergency Management Agency expressed its disappointment with the election results in a statement which read, “The constitutional amendments have the potential to politicize future disasters and their management. PEMA always stands ready to respond to any situation but we’re extremely disappointed that our efforts, and the efforts of our other state agencies, could be constrained by partisan politics, which has no place in emergency response efforts.”

The passage of these amendments was a victory for those with whom the principles of liberty and freedom still have meaning. In an email provided to The Western Journal, Commonwealth Foundation President and CEO Charles Mitchell reacted to the passage of these amendments with tremendous joy and relief. He called Tuesday a “momentous day in the history of Pennsylvania and the United States” and wrote that “voters have defended some of our most important founding principles, including the separation of powers between branches of government and the fundamental importance of each citizen’s liberty.”

Many governors “saw their emergency powers laws as a vehicle for them to act in contradiction to their own state constitutions and the U.S. Constitution for as long as they’d like.” Most of us would agree with that statement.

Mitchell quoted James Madison in Federalist Paper No. 51: “But the great security against a gradual concentration of the several powers in the same department, consists in giving to those who administer each department, the necessary constitutional means, and personal motives, to resist encroachments of the others … it may be a reflection on human nature, that such devices should be necessary to control the abuses of government.”

May Pennsylvania voters be the first of many states in the nation to impose restrictions on a governor’s authority under an emergency disaster declaration.

Elizabeth is a contract writer at The Western Journal. Her articles have appeared on many conservative websites including RedState, Newsmax, The Federalist, Bongino.com, HotAir, Instapundit, MSN and RealClearPolitics. Please visit Elizabeth’s new conservative blog: TheAmericanCrisis.org