President Donald Trump signed an executive order on Tuesday to promote religious freedom for oppressed religious minorities around the world.

Trump signed the order privately, without any media present.

The president’s action came on the same day he and first lady Melania Trump visited the Saint John Paul II National Shrine, where they laid a wreath at the statue of the former pope, according to Fox News.

President Trump signed an executive order that seeks to promote international religious freedom and stop religious persecution overseas after visiting @JP2Shrine. One of the items in the EO calls for spending millions of dollars to assist programs that advance religious freedom. 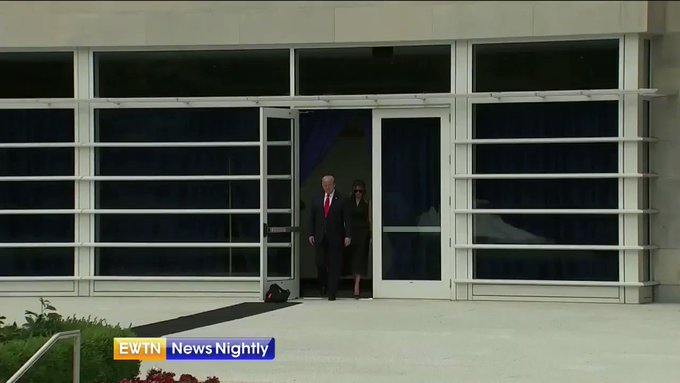 98 people are talking about this

Washington Archbishop Wilton D. Gregory lashed out at the visit, which came a day after Trump visited St. John’s Episcopal Church across from the White House, which had been damaged Sunday by rioters.

“I find it baffling and reprehensible that any Catholic facility would allow itself to be so egregiously misused and manipulated in a fashion that violates our religious principles, which call us to defend the rights of all people even those with whom we might disagree,” Gregory said in a statement.

“Saint Pope John Paul II was an ardent defender of the rights and dignity of human beings. His legacy bears vivid witness to that truth. He certainly would not condone the use of tear gas and other deterrents to silence, scatter or intimidate them for a photo opportunity in front of a place of worship and peace,” Gregory said, repeating an apparently false report that protesters were tear-gassed after scuffling with police so that the president could have a photo opportunity.

In his order, Trump said religious freedom is essential.

“[O]ur Founders understood religious freedom not as a creation of the state, but as a gift of God to every person and a right that is fundamental for the flourishing of our society,” the order read.

The order requires the State Department and the U.S. Agency for International Development to “prioritize international religious freedom in the planning and implementation of United States foreign policy and in the foreign assistance programs of the Department of State and USAID.”

In addition, the order requires than $50 million per year be spent on programs “intended to anticipate, prevent, and respond to attacks against individuals and groups on the basis of their religion, including programs designed to help ensure that such groups can persevere as distinct communities; to promote accountability for the perpetrators of such attacks; to ensure equal rights and legal protections for individuals and groups regardless of belief; to improve the safety and security of houses of worship and public spaces for all faiths; and to protect and preserve the cultural heritages of religious communities.”

“Yet again, President Trump is taking a decisive action to keep his promise to people of faith around the world,” White House counselor Kellyanne Conway said of the order, according to Fox.

“This executive order fully integrates the president’s vision – a vigorous defense of international religious freedom rights for all – into key aspects of United States foreign policy.”

“People are attacked for their faith, not just me, but Christian men and women across this country. It’s unfortunate, but I think we found a real voice in President Trump who stood for religious freedom and pro-life and [has] given us this boldness.” https://www1.cbn.com/cbnnews/us/2020/may/i-believe-god-put-me-in-this-place-for-a-purpose-new-wh-press-secretary-on-faith-love-of-country-and-overcoming-adversity …

‘I Believe God Put Me in This Place for a Purpose’: New WH Press Secretary on Faith, Love of…

73 people are talking about this

President Trump on Tuesday will sign an executive order to promote religious freedom overseas. Trump is scheduled to sign the order after a visit to the Saint John Paul II National Shrine in

The order calls for the State Department to work with nations that have been identified by the Commission on International Religious Freedom as those where religious freedom is either absent or under siege.

Jack Davis
Contributor, News
Jack Davis is a freelance writer who joined The Western Journal in July 2015 and chronicled the campaign that saw President Donald Trump elected. Since then, he has written extensively for The Western Journal on the Trump administration as well as foreign policy and military issues.