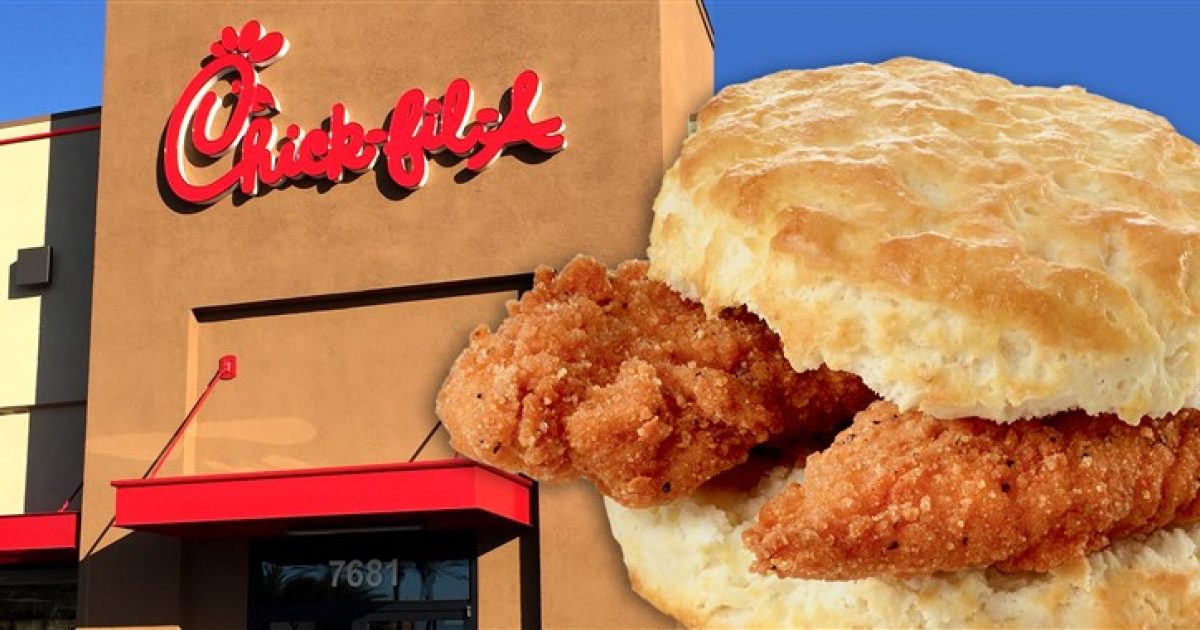 Americans love Chick-Fil-A. And it’s not just the delicious nuggets or waffle fries. People love the values clearly displayed in every single restaurant.

In fact, for the fourth consecutive year, Chick-Fil-A ranked number one. And it just doesn’t sit well with gay people. Although I have a feeling they secretly eat Chick-Fil-A, too.

For the fourth year in a row, the fast-food chain topped the American Customer Satisfaction Index for limited-service restaurant chains. The index is based on results from nearly 23,000 consumers.

Meanwhile, in regard to pizza places, Pizza Hut and Papa John’s both scored 80 points, with Domino’s at 79 and Little Caesars at just 77.

In a statement to Fox News, Chick-fil-A said, “We are honored by the ranking and grateful to our customers for choosing Chick-fil-A, it’s truly our pleasure to serve them. Our commitment to serving great food with gracious hospitality started more than 50 years ago with our founder’s first restaurant. Today, the more than 145,000 individuals who represent the brand in 2,400 restaurants make honors like this possible by continuing his commitment to service.”

Chick-fil-A’s high ranking can be attributed to several factors, including the company’s famous customer service training. Business Insider reports that the restaurant was named America’s most polite chain in QSR Magazine’s annual report.

This isn’t the only piece of good news for Chick-fil-A. The chain is expected to become the third bestseller fast-food chain in America, Fox 5 reports. Further, it’s expected to jump past Taco Bell, Burger King and Wendy’s, based on a study conducted by Kalinowski Equity Research. Making this an even more impressive feat is the fact that Chick-fil-A is closed on Sundays, while almost all of its competition is open seven days a week.

With Ratings like this, why would anyone ban the chicken chain?

Apparently, Chick-Fil-A gives too much to all the wrong people. At least according to one city in Texas.

The Lone Star State is typically a hot bed of conservatism. However, a few pockets of liberalism do exist. And San Antonio is among them. And according to San Antonio officials, Chick-Fil-A is way too Christian to be in the airport.

As Fox tell us:

In March, the San Antonio City Council voted to ban the popular chicken fast food restaurant from the airport, citing Chick-fil-A’s charitable giving to organizations like the Salvation Army and the Fellowship of Christian Athletes.

Councilman Roberto Trevino led the charge accusing Chick-fil-A of having a “legacy of anti-LGBTQ behavior.”

“With this decision, the City Council reaffirmed the work our city has done to become a champion of equality and inclusion,” Trevino said of the vote, News 4 San Antonio reported. “Everyone has a place here and everyone should feel welcome when they walk through our airport.”

Let’s dissect this for a moment.

The Salvation Army serves people from all walk of life. From their own website, their mission is to help with adult rehabilitation, veterans service, assistance for the elderly, prison ministries, combating human trafficking, and advocating assistance for missing persons.

Further, Salvation Army helps children with Christmas programs, summer camps, hunger relief, and homelessness. The latter of which is a domestic problem often ignored. Additionally, Salvation Army provided disaster relief. They feed and clothe people after hurricanes, fires, and other disasters that leave families dislocated without any resources.

As for the Fellowship of Christian Athletes, they seek to inspire student athletes and coaches around the world with the values of integrity, serving, teamwork, and excellence. Their non-denominational approach seeks to “make disciples through our methods of engaging, equipping and empowering coaches and athletes to know and grow in Christ and lead others to do the same.”

So, why would it be terrible for a fast food chain to fund such activities?

According to San Antonio officials, it’s unfair to the LGBTQ community to inspire wholesome values. Things like honesty and integrity should be left on the side of the road to die.

Like I said, Texas is a hotbed of conservatism. Thus, these actions “did not go gentle into that good night.” Instead,  Chick-Fil-A  decided to “rage against the dying of the light.”

The religious liberty law firm that just won the Bladensburg Peace Cross case at the Supreme Court believes this decision by the local government is not only wrong but illegal.

“If San Antonio city officials are proud of their decision to ban Chick-fil-A from the city’s airport, why do they insist on hiding from the public its records about the decision?” Keisha Russell, First Liberty Institute counsel, said in a statement.  “The public deserves to know just how deeply the religious animosity runs within San Antonio’s city government.”

Banning Chick-fil-A for its supposed anti-LGBTQ stance has become a trend for liberal cities and college campuses, or at least attempts to do so, but reps for the company told Fox News “the 140,000 people who serve customers in our restaurants on a daily basis represent and embrace all people, regardless of race, gender, ethnicity, sexual orientation or gender identity,” they continued. “Our intent is to have a positive influence on all who come in contact with Chick-fil-A.”

The company said it welcomes a dialogue with the city council.

“It’s unfortunate that mischaracterizations of our brand have led to decisions like this,” a rep for Chick-fil-A said. “The sole focus of the Chick-fil-A Foundation is to support causes focused on youth and education. We are proud of the positive impact we are making in communities across America and have been transparent about our giving on our web site.”

Last month, his new bill, aptly title “Save Chick-Fil-A” passed into law. Now, it is illegal to take adverse action against a person or business based on their charitable contributions. Once again, we’re forced to legislate something that should be common sense. But thanks to leftists, we have to spell it out. It’s not ok to punish Chick-Fil-A for their philanthropy.

Sadly, I bet leftists would line up for chicken sandwiches all day long if Chick-Fil-A ditched their values and started putting voodoo dolls wearing rainbow t-shirts in their kids meals.

The Ann Coulter Letter: When the MSM Say Someone Is in Prison for a Minor Drug Crime, They’re Always Lying