Gee, what will anti-gun activist, David Hogg, have to say about this?

Back in 2012, the Venezuelan government banned the private sale of firearms. The BBC reported that the move was to ‘improve security and cut crime’.

Here’s an awkward pair of headlines: 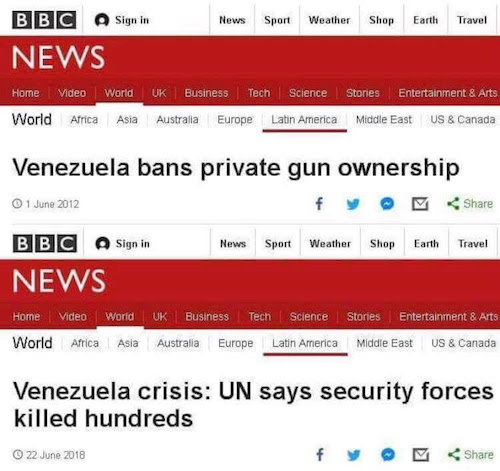 If that isn’t an argument for the Second Amendment, I don’t know what is.

Here’s a snippet from that 2012 BBC article:

Venezuela has brought a new gun law into effect which bans the commercial sale of firearms and ammunition.

Until now, anyone with a gun permit could buy arms from a private company.

Under the new law, only the army, police and certain groups like security companies will be able to buy arms from the state-owned weapons manufacturer and importer.

Venezuela saw more than 18,000 murders last year and the capital, Caracas, is thought to be one of the most dangerous cities in Latin America.

The Hugo Chavez government even ran a gun amnesty program to allow those with illegal firearms to bring in the weapons without fear of reprisal.

And they were honest about their goal.

Hugo Chavez’s government says the ultimate aim is to disarm all civilians, but his opponents say the police and government may not have the capacity or the will to enforce the new law.

Oh, and look what was slipped in there at the end of the article.

According to a recent United Nations report, South America, Central America and the Caribbean have the highest rates of murder by firearms in the world. (Emphasis added)
Source: BBC, June 2012

So, you’re saying that it’s not the United States with the highest per capita private firearm ownership in the world?

You mean to tell me that there are law-abiding gun owners out there? And that the single country in the world that ensures the most freedom doesn’t have the same homicide rate as some of those socialist sh!thole countries?

But that article was written waaaaay back in 2012.

Yo, Bernie, whatcha gotta say about that? Is Venezuela still the place to find the ‘American Dream’ that you posted on your website in 2011?

Well, let’s take a look at the headlines and see.

Looks like their plan to ‘reduce crime’ didn’t work. Unless it wasn’t about ‘reducing crime’ at all…

The article explains that despite the anti-gun law, homicide rates have soared.

Since April 2017, at least 163 pro-democracy protesters in Venezuela have been murdered by the Maduro dictatorship. Venezuela serves as an example of how gun prohibition can sometimes encourage gun crime.

In 2012, the communist-dominated Venezuelan National Assembly enacted the “Control of Arms, Munitions and Disarmament Law.” The bill’s stated objective was to “disarm all citizens.” The new law prohibited all gun sales, except to government entities. The penalty for illegally selling or carrying a firearm is a prison sentence of up to 20 years. Despite criticism from the democratic opposition, the bill went into effect in 2013.

Ostensibly, the motive for gun prohibition was Venezuela’s out of control violent crime. In 2015, Venezuela’s homicide rate was the world’s highest, with 27,875 Venezuelans murdered that year. More broadly, the Bolivarian Republic is the only South American nation with a homicide rate that has steadily risen since 1995. In the year prior to Maduro’s disarmament initiative, the Venezuelan capital of Caracas had a homicide rate of 122 per 100,000 inhabitants, nearly 20 times the global average of 6.2.

The high homicide rate is attributed to robberies, and 70 percent of all crime was due to armed robberies. The article goes on from there describing the rampant poverty in Venezuela — 87 percent of the country at the time. Desperate people are doing desperate things.

And the government took the only tool that individuals had to protect themselves, their loved ones, and their property — assuming the government hadn’t already taken it without compensation.

The government then suppressed dissent.

As has been typical of tyrannies since the dawn of time, arms prohibition has aided in the suppression of dissent. Indeed, the Venezuelan Violent Observatory has reported a notable increase in state violence; lethal extrajudicial force is frequently used against criminals and against political dissidents. (Emphasis added)

The Maduro government confiscated firearms, destroyed some in a display of might, but some others, well… they ‘somehow’ slipped through the cracks.

In other words, the Maduro regime stripped Venezuelans of their right to self-defense and then transferred the confiscated firearms to its loyal thugs.

When the public is disarmed, ordinary criminals have greater impunity to rob and murder the innocent. So do criminal governments.
Source: The Hill

And now we’re up to speed to what’s happening in 2018. Back to the BBC’s new article.

Venezuelan security forces have carried out hundreds of arbitrary killings under the guise of fighting crime, the UN’s human rights body says.

In a report, it cites “shocking” accounts of young men being killed during operations, often in poor districts, over the past three years.

The UN’s human rights chief said no-one was being held to account, suggesting the rule of law was “virtually absent”.

Venezuela has in the past dismissed human rights allegations as “lies”.

The UN Human Rights Office alleges that extra-judicial killings were carried out by officers involved with the Operations for the Liberation of the People, ostensibly a crime-reduction initiative.

These officers may have killed more than 500 people since July 2015 as a way to showcase crime-reduction results, it says. They are alleged to have faked evidence to make it look as though the victims died in exchanges of fire.
Source: BBC, June 2018

This is why we need to protect the Second Amendment from the gun-grabbers.

We don’t want to become sitting ducks like the people of Venezuela.